• FM warns Afghan Taliban over TTP attacks.
• No new agreement with US over terrorism. 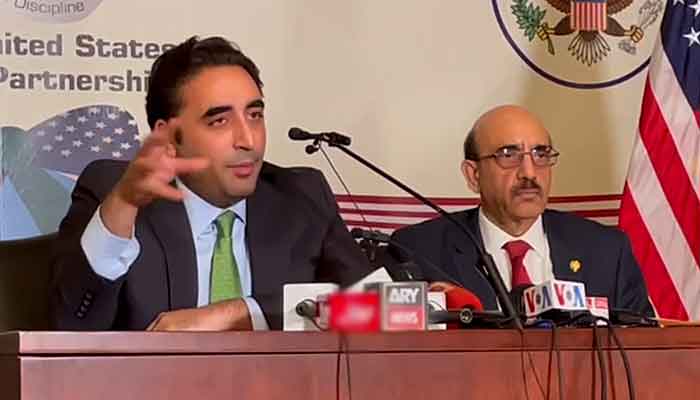 WASHINGTON: Foreign Minister Bilawal Bhutto Thursday said the Afghan Taliban have been told that the banned TTP is Pakistan’s redline and Islamabad’s relationship with Kabul will be affected if the terrorist outfit is not controlled.

Speaking to the media at the Pakistan Embassy in Washington, Bilawal Bhutto said, “We will not ignore if we found out that Taliban are not stopping TTP.”

The rising number of terror incidents has put the security apparatus in the country on alert as the Bannu hostage crisis sent shockwaves across the country. Over 120 policemen were martyred and over 125 others were wounded in different kinds of attacks on the police force in Khyber Pakhtunkhwa during the current year.

The top Pakistani diplomat is in the US where he held meetings during which he met with the UN chief, chaired a G77 meeting and spoke at Atlantic Council in Washington.

Expressing his concern over the deteriorating law and order situation in the country due to rising TTP attacks from Afghan soil, Bilawal said if the Taliban carry out operations against the extremists, Pakistan will provide help if needed.

He said that there was no new agreement on cooperation with the US for anti-terrorism.

“We urge to release frozen funds for the Afghan people not for the Taliban. They [Taliban] promised with US and the world to take action against extremist groups,” said Bilawal.

In response to a question, the foreign minister said that the building owned by Pakistan in Washington must be sold as the condition of the property is bad.

“Taxes and other expenses are high on it. But I am not in favour of selling the hotel in New York.”

Bilawal, when asked about elections in Pakistan, said that polls will be held on time and Imran Khan wants early elections to get help in the rigging.

The foreign minister said that institutions confined themselves to their constitutional roles, but some politicians are spreading hatred and giving the perception of enmity to political differences.