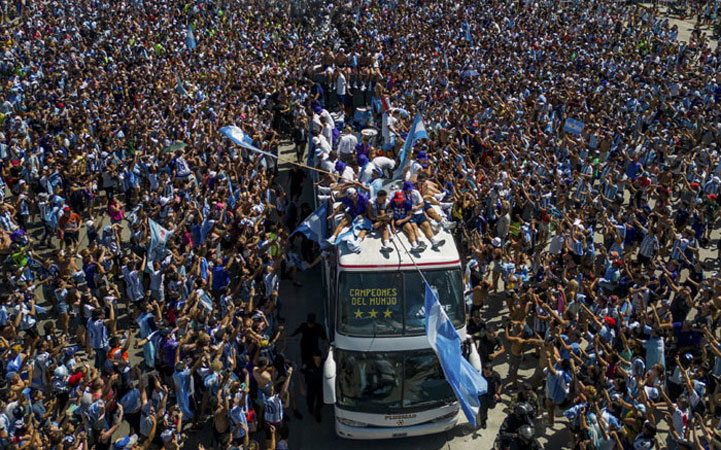 BUENOS AIRES: Millions of jubilant fans turned out Tuesday to welcome home Argentina’s World Cup winners led by Lionel Messi, but most were left disappointed when an open-top bus parade had to be abandoned due to the massive crowds, in favor of a hastily organized helicopter tour. Vast crowds of ecstatic fans cheered on their heroes along every meter of the planned 30-kilometer parade route from a Buenos Aires suburb to the center of the capital — but that made for interminably slow progress.

The bus had crawled along for almost five hours as the throng celebrated the team’s thrilling penalty shoot-out victory over France in the World Cup final, before the decision was made to trade the bus for a chopper.

“It was impossible to continue on the ground due to the explosion of popular joy,” presidential spokeswoman Gabriela Cerruti said on Twitter.

It meant that many fans, including the largest congregation at the iconic Obelisk monument in central Buenos Aires that has for decades been the epicenter of sporting celebrations, did not get to see their idols in the flesh.

“I’m a little bit sad that we weren’t able to see them,” said Marta Acosta, 35, who traveled into town from a southern suburb at 5:00 am.

Claudio Tapia, president of the Argentine Football Association (AFA), blamed police for the decision to abandon the victory parade.

“They are not allowing us to go and greet all the people at the Obelisk,” said Tapia on Twitter.

“The same security agencies that escorted us are not allowing us to continue. Thousands of apologies in the name of all the champion players. It’s a shame.”

A statement from the federal police suggested that the parade was over, with the helicopter taking the players back to the AFA training complex where they began the day.

Throngs of revelers wearing the national team’s blue and white replica shirts and draped in flags sang, danced and set off fireworks throughout the day, with many camping out all night to secure spots along the parade route.

But three hours into the procession, the bus had barely covered a third of the planned path. Eventually, the vehicle was ditched.

Instead, Messi, coach Lionel Scaloni and midfielder Rodrigo De Paul took the World Cup trophy with them for a helicopter ride over the main parade sites, including the Obelisk, police said. For some fans, the short-circuiting of the party was inevitable.

“Only someone who does not know what football means to the Argentine people could think this was not a possibility,” Roman Garcia, 38, told AFP.

An estimated five to six million people had lined the parade route, a government source said.

Television images showed one man trying to jump from a bridge onto the players’ bus but missing and falling into a crowd of people.

After arriving home from Qatar in the early hours of the morning, the players spent a short time resting at the AFA training complex in the Ezeiza suburb of the capital.

Tuesday had been declared a public holiday for the celebrations.

“This trophy that we won is also for all those that did not manage to win it in previous World Cups we played, such as Brazil 2014,” Messi said on social media, referring to the team that lost 1-0 to Germany in the title match eight years ago.

He also paid tribute to current and past teammates, as well as backroom staff. “Thank you from the heart! Come on Argentina!” added Messi.

Argentina won the final in Qatar 4-2 on penalties after a roller-coaster 3-3 draw for their first world title in 36 years.

The party that began after Sunday’s final was supposed to climax with the players’ parade through the capital.

Many fans had come from all over the country to Buenos Aires in the hope of catching a glimpse of the players.

“For me it would already be a lot just to see them,” Valentino Pino, 19, said early Tuesday.

Messi, 35, crowned his record-breaking career with football’s biggest prize as he produced one of the greatest World Cup final performances, scoring a first-half penalty and netting again in extra time.

In doing so, he emulated his predecessor as Argentina’s idol, Diego Maradona, who inspired the country to their second world title with a series of match-winning displays at Mexico 1986.

France’s beaten players were given a rousing reception by fans in central Paris on Monday after their return from Qatar.

They appeared on the balcony of the Crillon Hotel overlooking the Place de la Concorde.