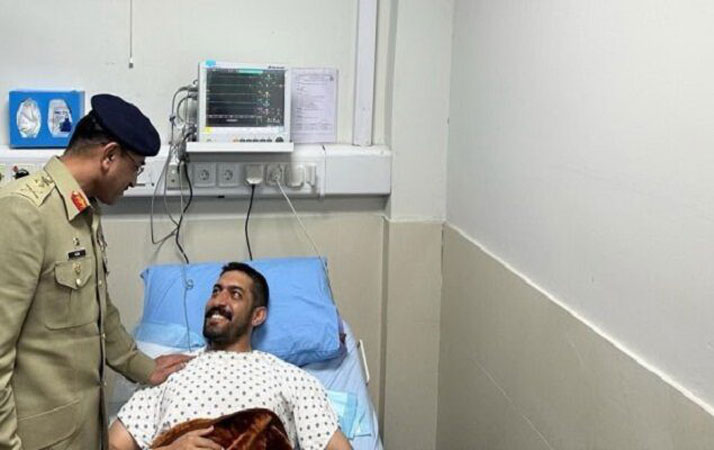 In a statement, the Inter-Services Public Relations (ISPR) said that the army chief met the injured officers and soldiers at the Combined Military Hospital (CMH), Rawalpindi. The soldiers were injured during an operation conducted to free the hostages held by militants at a Counter Terrorism Department (CTD) facility in Bannu.

While remaining with them for “some time”, the COAS inquired about their well-being and appreciated their high spirit and morale. He also lauded their professionalism during the operation against terrorists. Militants overpowered the CTD personnel stationed at the centre last Sunday and held them hostage for three days. Coming into action, the Pakistan Army’s Special Services Group (SSG) stormed the facility Tuesday. As a result of the operation, 25 terrorists were killed, two arrested, and seven surrendered, Director General Inter-Services Public Relations (ISPR) Major General Ahmed Sharif Chaudhry said.

However, a junior commissioned officer and two sepoys were martyred – Subedar Major Khursheed Akram, Sepoy Saeed, and Sepoy Babar – while 10 soldiers, including three officers, were injured in the action, the military’s spokesperson said. He expressed the security forces’ resolve to wipe out terrorism, adding sacrifices by the brave martyrs further bolster the determination. Maj Gen Sharif further said that the latest wave of terrorism from the western border will not be allowed to emerge. “Whoever comes against us will be crushed,” he warned.