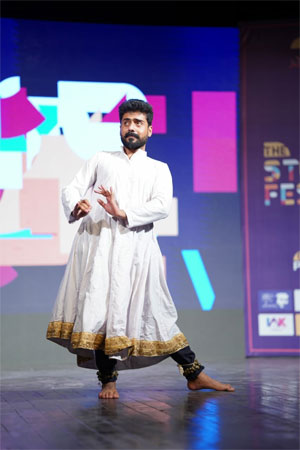 Kathak is one of the eight major forms of Indian classical dance. The word Kathak has its roots in the Sanskrit word ‘Katha’ which translates to story or tale. It is traditionally regarded to have originated from the travelling bards of North India referred as Kathakars or storytellers.

Ahmed-ibn-e-Sakeena, hailing from Awaran, Balochistan, is the first male semi-classical Kathak dancer who rose to prominence for his masculine energy, balanced posture, flexibility, facial expressions and elegant hand movements. Ahmed pursued his basic education from his native area and graduated from Mehran University of Engineering & Technology in Centre of Excellence in Art & Design. Thereafter, he travelled to Lahore to get an MPhil degree from the prestigious National College of Arts (NCA), and pursue a professional career in Kathak.

“I have been fond of dancing since my childhood,” says Ahmed. Even though he didn’t know the forms of dance, he still kept dancing and moved his body to the rhythmic beat of the songs played on a portable radio and eventually, he discovered this classical dance form of Kathak in 2012 which, he says, paved his way to a dancing career.

Following his unique artistic talent and family’s support, Ahmed has been emerging as one of the finest Kathak dancers in Balochistan. He said people had made a mockery of the concept of a male Kathak dancer.

“People have labelled me as ‘sex worker’, ‘gay’, ‘impotent’ etc,” he says with saddened, but unsurprised emotions. “Because I belong to a highly conservative region and here people know little about the significance of arts and cannot grasp the idea of this classical Kathak dance,” he explains.

He said he had frequently received verbal abuse and death threats on social media through fake IDs. “At times, online abuse and harassment plunged me into depression,” he remarks. “It took a huge toll on my mental health as well.” Ahmed says he was vulnerable to suicidal tendencies and was even about to commit suicide, but he was lucky to have encouraging friends who stood by him and boosted his morale. “They pushed me to sail through my artistic journey,” he narrates.

“When would people understand artists, too, are human beings and can become sad and depressed through social media abuse and harassment?” he asks in a heart-breaking tone.

Ahmed concedes to the fact that it is not easy for him to challenge gender stereotypes and overcome all obstacles. But he is committed that he won’t be intimidated into abandoning Kathak dance. “I won’t relinquish Kathak dance because it is the part of my existence. And I am a warrior and I would combat all odds. Threats and abuses cannot shatter my confidence. I would emerge stronger instead,” he says in a fearless tone.

Concerning the background of dance in Baloch society, dance is considered as a cultural taboo. Not only Ahmed-ibn-e-Sakeena, but also many Baloch prominent singers like Nako Faizuk, Nako Sabzal, Arif Baloch were criticised widely for dancing along with singing songs. On the other hand, the Baloch educated class is fighting hard to overcome this cultural taboo and acknowledge the dance as an ‘art’.

“Dance can be used to convey the message of love and peace. It can be a compelling tool to neutralise warmongering opinions and counter a bloody conflict because dance carries an emotional appeal for peace,” Ahmed emphasizes the significance of peace over conflict through dance. Kathak dance is the form in which, he believes, he can blend his emotions, tell a story, convey a message, spread peace and prevail love. He adds that the Kathak dance feels like a magic and casts a spell on the audience which results into evocation of one’s internal state of peace and satisfaction.

He grieves that the negligible contribution of Balochistan government in promotion of artistic talents is adding to the woes of the artists. The lack of resources and disengagement by the government is affecting the efficiency of artistic works. “I struggle to continue Kathak dance as a professional career. I don’t have adequate resources to chase my dream,” Ahmed mourns but is still confident on making his way in one or the other way.

People often invite him in various events and tell him to dance freely for them. “I hardly earn Rs 10,000 in a single event which sometimes take place in two or three months,” he says

Given the Shariah perspective on Kathak dance, renowned Mufti Naeem, based in Quetta, asserts that any form of dance accompanied with music is forbidden in clear terms in Islam.

“Music and dancing are haram in Islam. Those who consider it ‘halal’ are actually committing Kufr,” says Mufti. Dance tarnishes the honour and dignity of a person, he maintains. He says that dance is, in actual, an ‘animalistic characteristic’ which carries random jumping from one place to the other place. “It can never be regarded as legitimate and permissible in Islam.” Ahmed didn’t deny the Islamic point of view. He said that everyone had their own opinions and perspectives and he didn’t have the authority to alter other doctrines. “But if you view it from the artist’s point of view, dance is an art,” he firms his view, adding that dance serves as a food to the soul and strength to the heart and acts like a soothing balm, while religious scholars view it as a sin. “It is all about diversity of perspectives when it comes to dance,” Ahmed says. A poet, fiction writer, critic, a translator and professor at University of Balochistan, AR Dad said that Kathak dancer like Ahmed-ibn-e-Sakeena is a ray of hope in the Baloch society who is breaking the barriers and making a difference with his masculine energy following classical Kathak dance.

“Kathak dance is an essential ingredient of life and is a poetry of the body,” Dad puts forward. Kathak is truly secular in concept and people often unknowingly incorporate this dance with religion by relegating it to a form of lewd entertainment and branding it as un-Islamic and immoral, he continues. “That’s why, it is a fast diminishing art form in Balochistan.”

Dad says it is a good omen that educated people like Ahmed are coming to the fore and promoting this classical dance which is a great medium to convey a message of love and peace. Dad adds it might take years to break deeply-seated social stereotypes and change the archaic mindsets prevailing in Baloch society regarding Kathak dance, but Ahmed could make a huge impact if he beats all odds courageously and performs Kathak dance without any fear. He could pave the way for the generations to come.

The writer is a freelance journalist based in Quetta