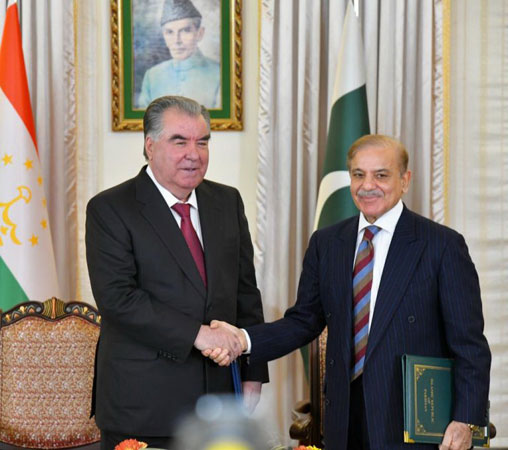 Prime Minister Shehbaz Sharif on Wednesday said that Pakistan wanted the establishment of energy, rail and road connectivity with the diverse energy resources rich Central Asian Republics (CARs) for the development and prosperity of the entire region.

During a joint press stakeout with President of Tajikistan Emamoli Rahmon, the prime minister said Pakistan desired early completion of the Central Asia-South Asia (CASA-1000) power project to meet its energy needs. He said Pakistan had been the first country that established ties with Tajikistan some 31 years back. Since then both countries had been enjoying excellent cordial and friendly ties. Pakistan wanted to further strengthen the bilateral cooperation and ties in all fields including energy, trade, joint ventures in agriculture and food etc, he added.

Prime Minister Sharif further said Pakistan attached immense importance to its bilateral ties with Tajikistan as it was a gateway to the CARs. He informed that they held very productive meetings to further strengthen the bilateral relations and promote trade, investment and culture between the people of two brotherly nations.

The prime minister expressed the hope that Tajik President Emomali Rahmon’s visit to Pakistan ‘would usher in new era of cooperation and development between the two countries. He also welcomed the Tajik president and his delegation and said that the people of Pakistan were overwhelmed with joy and pleasure over their visit. President Tajikistan Emomali Rahmon, reciprocating the warm feelings for the government and people of Pakistan, said that his country attached high priority to its ties with Pakistan. He said both countries had been making joint efforts to further promote the friendly ties and expressed the optimism that the MoUs signed between the two countries would give new impetus to these relations. He said during their delegation-level deliberations, they had discussed government-to-government level contacts, security, economic situation, global economic decay, energy and connectivity activities and linking of port city of Karachi.

He said they also had useful exchange of views on CASA-1000, cooperation in agriculture, energy connectivity, joint ventures in food technology, trade, science and technology and cooperation between the business communities of the two countries. President Rahmon further said that both countries shared commonalities which served to further strengthen these ties. The two sides also expressed satisfaction over cooperation in security and reaffirmed to face contemporary challenges jointly like extremism, terrorism and radicalism, he added.

He said that they also acknowledged the significance of concerted global efforts for a stable and peaceful Afghanistan, adding Tajikistan and Pakistan were also closely cooperating at the global level including UN, Economic Cooperation Organization (ECO), Shanghai Cooperation Organization (SCO) and other multilateral foras. He also wished for progress and prosperity of Pakistan and its people. Earlier, Tajik President and the Prime Minister of Pakistan witnessed the inking of a number of MoUs and agreements to boost bilateral cooperation in diverse fields.

These MoUs and agreements included MoU for establishment of Sister Cities Relations between Dushanbe and Islamabad, Agreement over cooperation in industries and technology, Agreement over Transit Trade, Agreement between Tajik Drug Control Agency and Anti-Narcotics Force Pakistan to control illicit trade of narcotics drugs, and psychotropic material etc; agreement for cooperation between Tajikistan Agency of Standardization, Meteorology, Certification and Trade Inspection and Pakistan’s Standards and Quality Control Authority, MoU between Customs Service of Tajikistan and Federal Board of Revenue (FBR).