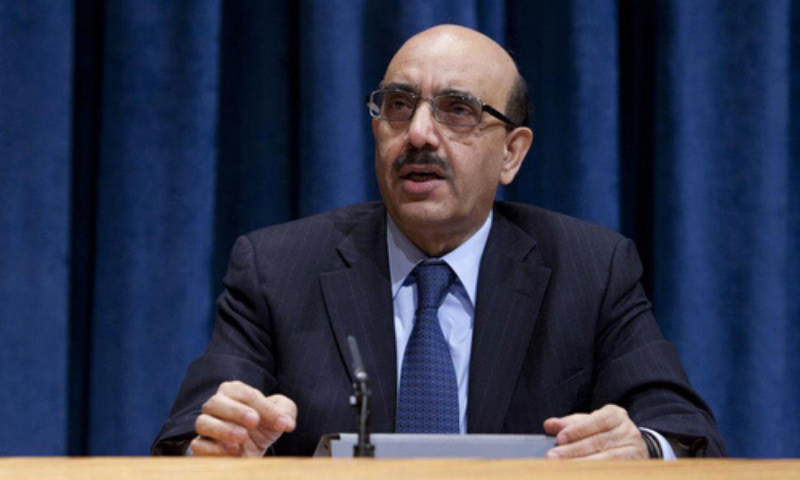 “When Pakistan would complete its 100 years in 2047, the World Bank in its report Pakistan@100 foresees it as an innovation-driven country of multiple trades and investment hubs and centers of excellence,” said Pakistan’s Ambassador to the United States.

“Pakistan has the 23rd largest economy on the basis of Public Private Partnership (PPP) and 42nd in terms of nominal GDP. This is a transient phase. Our economy is poised to grow fast, current difficulties notwithstanding. Its full size is masked by the vast undocumented and untaxed economy. We are streamlining our systems to address these anomalies,” he continued.

Addressing an event, Ambassador Masood Khan said that Pakistan’s demographic cohorts were tailor-made for an emerging economy. It was the 5th largest nation with a population of 220 million, of whom 80 to 100 million were in the middle class and 64 percent or 130 million were below the age of 30. “It is a young country, with abundant labor and a growing professional class. There are 184 million cellular phone users and 110 broadband subscribers in the country. Hundreds of thousands of students are graduating from Pak universities ready to be absorbed by national and global markets,” he added.

Masood Khan pointed out that Pakistan, for decades, was the fastest-performing economy in South Asia and one of the fastest in Asia. “Its growth slowed down because of wars in the neighborhood and security challenges posed by terrorism,” he said.

“Now the security situation is improving and there are no wars. We will resolutely build our markets. The economy is our lodestar. The economy will bounce back,” he added.
He further said that in the past two decades, poverty had declined from 64% to 24 %.

Highlighting the existing business opportunities and profitable business ventures of leading MNCs in Pakistan, Ambassador Khan said that new and ground-breaking business ecosystems were being unlocked in Pakistan. The US, Canada, Europe, the Gulf States, Turkey, China, Japan, South Korea, Malaysia, and Indonesia – all were investing in Pakistan recognizing the promise of our market and supply chains.

“The tech sector, though nascent at this stage, is witnessing exponential growth with the potential to become an alternative startup hub in the neighborhood,” he added. The Ambassador said that the sector was being supported by top foreign Venture Capital/Private Equity firms, 60% of them were from the US. “Tech startups in Pakistan are bullish, not frothy,” he observed.

“Cumulatively and consecutively, we are undertaking reforms for economic restructuring, equitable growth, human development, internal and external security, the rule of law, access to justice, education, and building resilience against climate change. It is our endeavor to make Pakistan a diverse and inclusive society,” Ambassador Khan said.

Ambassador Khan also pointed out Pakistan was spearheading the cause of climate change and the collective responsibility to save the planet from annihilation.

It was under Pakistan’s leadership that COP27 agreed to the principle of ‘loss and damage’, a milestone in climate diplomacy. “In Pakistan, we have our work cut out to build a weather-resistant, climate-resilient infrastructure,” he continued.

Appreciating the US administration for its generous assistance of $ 97 million for the relief and recovery phase and also ordinary American citizens who have donated $ 27 million for flood relief efforts, the Ambassador called for the US’ continued support to provide long-term support to Pakistan for recovery and rehabilitation.