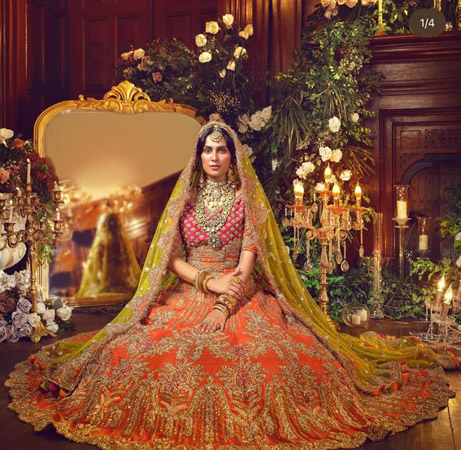 There are undoubtedly many outstanding actresses in the entertainment industry, but it is very difficult to find one with Ayeza Khan’s track record of success across the board.

The “Tootay Huway Per” star has a plenty to showcase to her admirers, from her acting prowess to her uber-cool social media posts and everything she does is quite exceptional.

As the competitiveness amongst actresses today extends beyond social media to photoshoots as well, the diva frequently impressed her fans with her eye-catching photoshoot, so how could she fail to do so now?

The “Chupke Chupke” actress, a frequent user of social media, has once again succeeded to cause an uproar with her captivating photoshoot, in which the starlet appears to be no less than a bride. She is pictured donning a vibrantly embellished wedding attire to astound her followers.

Along with the posing, the photoshoot’s set was exquisitely decorated with many props, which raised the quality of the pictures.

Ayeza, who knows the art of stealing the spotlight, once again forced her fans to post applauding feedback in the comments box. One of the fans while acknowledging Ayeza questioned, “Why she is always that beautiful???”

Another user was inspired by the starlet ‘s photoshoot and added an orange heart-emoji.

Aside from her incredible acting abilities and versatility, Ayeza developed a strong bond with her fans, which helped her amass 12.4 million followers on her Instagram account.