Will Elton John’s sons Elijah and Zachary follow in his musical footsteps?

* At the event, where Saks donated $1 million to the Elton John AIDS Foundation's Rocket Fund, the 'Crocodile Rock' singer reflected on the special holiday 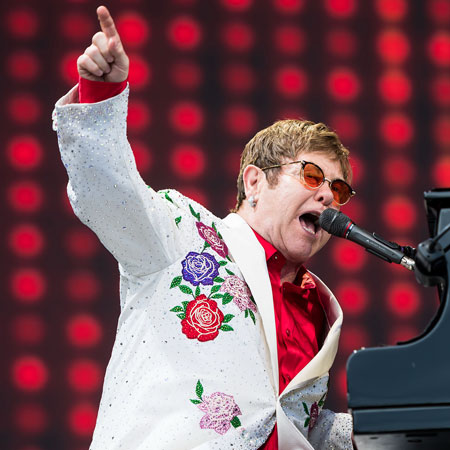 Following the yellow brick road. Hot on the heels of his star-studded show at Los Angeles’ Dodgers Stadium, Elton John weighed in on whether his sons Zachary, 11 and Elijah, 9, who he shares with husband David Furnish, have musical aspirations of their own. “They are still so young, so not entirely sure,” Elton told E! News on Nov 23 at unveiling of Saks Fifth Avenue’s holiday windows in New York City. “But of course, whatever their dreams and ambitions are, my husband David and I will fully support them.”

At the event, where Saks donated $1 million was donated to the Elton John AIDS Foundation’s Rocket Fund, the “Crocodile Rock” singer reflected on the special holiday tradition.

“Taking the stage on Fifth Avenue and feeling the magical energy of New York during the holidays, is the best way to celebrate the end of my Farewell Yellow Brick Road tour in the US,” he shared. “I share the appreciation for luxury fashion that Saks has, and have always seen their holiday windows as one of the most iconic parts of New York City during the holidays.”

He continued, “Year after year, I am inspired by the creativity and imagination that Saks brings to its legendary holiday windows lighting up Fifth Avenue. I am also thrilled to have my curated merchandise collection on Saks.com, in support of the Elton John AIDS Foundation, with pieces integrated into this year’s window display.”

Elton’s concert at Dodger Stadium Nov. 20 marked the last stop on his North American Farewell Yellow Brick Road Tour. JoJo Siwa, John Stamos, Miles Teller, Jenna Dewan, Sophia Bush were among the fellow celebs who watched the veteran singer take what is believed to be his final bow as a headliner.

Elton wore a silver robe with navy blue lapels, matching cuffs, belt and sequin cap-a nod to the bejewelled baseball uniform he originally sported at a past concert in 1975. According to the 75-year-old, this marked the first time he returned to the iconic baseball stadium since that year, so his fashion moment proved to be all the more meaningful.

“I have had so many costumes over the years,” Elton told E! News. “Gucci made an incredible crystal encrusted robe and Bob Mackie did a fresh take on my Dodger hat. It was the perfect outfit for me to end my tour in the US, at a venue that meant so much to me.” Now that his North American tour has wrapped, the musician is looking forward to soaking up some family time and dedicating himself to his charity work.