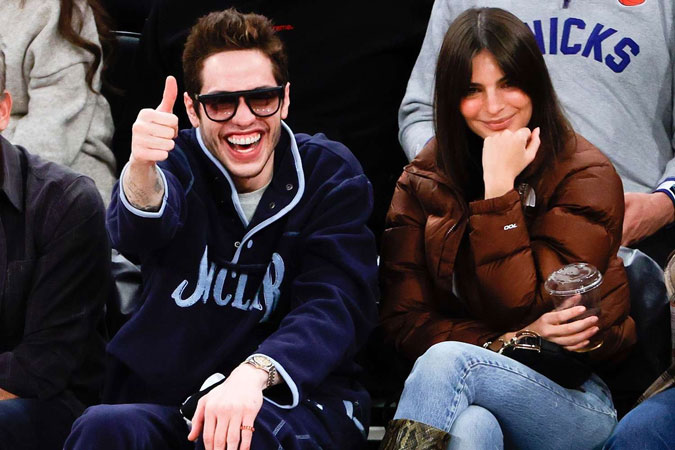 Rebounding? Weeks after sparking romance rumours, Pete Davidson and Emily Ratajkowski attended a NBA game between the Memphis Grizzlies and the New York Knicks on Nov. 27 at Madison Square Garden in New York City. For the court-side outing, the Saturday Night Live alum kept his look ultra-casual wearing a navy blue sweatsuit and shades, while the model donned a brown North Face puffer coat teamed with skinny jeans and knee-high boots. According to eyewitnesses, the pair were featured on the Jumbotron during the game. Earlier this month, a source close to Emily exclusively told E! News that the two have “gone on a few dates” together. While the stars have known each other for years, the insider shared that they reconnected after “Pete texted Emily wanting to get together to catch up.”

On Nov. 16, Pete’s 29th birthday, the pair were spotted together in New York City. Alongside the comedian, the 31-year-old was photographed holding a wrapped package from NYC’s Three Lives & Company bookshop, possibly a gift for Pete.

“Emily is super into Pete right now,” another source exclusively shared with E! News. “It’s still very new, but they have been in nonstop communication and she just went out with him to celebrate his birthday and wanted to make him feel special.”

The insider added, “It’s a chill relationship so far. There’s no pressure to make it exclusive, but she really likes him.”

The pairing comes three months after Pete split from Kim Kardashian after nearly a year of dating. As for Emily, she filed for divorce from husband Sebastian Bear-McClard-who she shares 20-month-old son Sylvester-in September, following four years of marriage. While neither Emily or Pete have officially commented on their status, the My Body author previously went on record saying that she gets why “women find him very attractive.”

“Pete-he’s got the height,” she gushed during a 2021 appearance on Late Night with Seth Meyers. “Guys are like, ‘Wow. What’s that guy got?’ And I’m like, I mean, he seems super charming.” Emily continued, “He’s vulnerable. He’s lovely. His fingernail polish is awesome. He looks good! He’s great! Good relationship with his mother. We love it.”