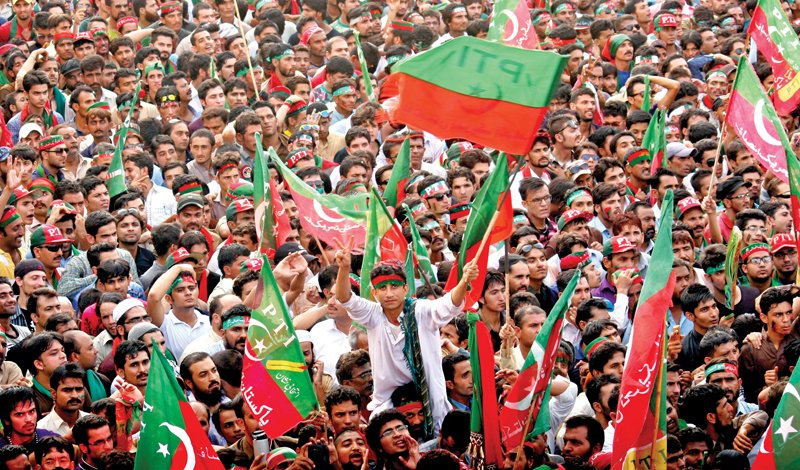 The administration of the federal capital on Thursday granted conditional approval to the Pakistan Tehreek-e-Insaf (PTI) for holding a rally at Faizabad. However, the administration denied the party permission for landing or takeoff of a helicopter from the Parade Ground in Islamabad. In a notification issued on Thursday afternoon, the Islamabad Capital Territory (ICT) District Magistrate said the application of PTI filed by Ali Nawaz Awan has been examined at length. The notification further added that section 144 is imposed on all kind of public gatherings in federal capital including in and around red zone. However the permission for holding of rally is conditionally being granted on proposed routes. The notification also added route that participants coming From Khyber Pakhtunkhwa (KP) on Peshawar Road and Motorway M1 and M2, the participants coming from northern parts of country (KP etc) through Grand Trunk (GT) road or through Motorway (M1 and M2) will reach Chungi 26 from where they will move on Peshawar Road towards Rawalpindi and take IJP Road. On IJP Road, they will use Saidpur Road to reach Murree Road near Jalsa venue.

Meanwhile, the General Headquarters (GHQ) also formally informed PTI that it has no objection over the landing of Imran Khan’s helicopter at the Parade Ground. In a letter, the military’s leadership suggested PTI seek permission from the Islamabad administration as the Parade Ground falls under its jurisdiction.

Awan subsequently requested the ICT district administration to provide permission for Imran’s helicopter to land and takeoff from the ground.

Referring to the federal government’s alert, the PTI leader said that Imran Khan faces serious threats to his life and the use of a helicopter is vital to ensure his safe participation in the party’s November 26 rally.

“There is no justification for creating hurdles in the landing of Imran Khan’s helicopter at Parade Ground after GHQ’s NOC,” he argued.

ICT administration explained that the Parade Ground was a highly sensitive area because of its geographical location within the federal capital.

Presently, it said, no helipad was available in the federal capital.

In a view of this, request for a helicopter landing and taking off at the Parade Ground was “regretted.”