* COAS says time's come for political stakeholders to set aside ego, move forward
* No single party could take the country out of financial crisis 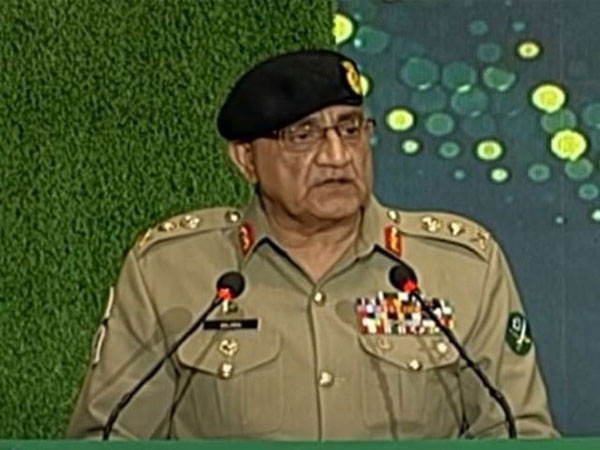 Chief of the Army Staff General Qamar Bajwa on Wednesday stated that the military has decided to remain apolitical and will remain so in the future.

Addressing the Defence and Martyrs Day ceremony at the General Headquarters in Rawalpindi, the army chief said he was addressing “as the army chief for the last time…I am retiring soon”. After paying a tribute to the fallen, General Bajwa commented on political matters and said armies around the world are seldom criticised but the army in Pakistan is often subjected to criticism. “I think the reason for that is the army’s involvement in politics.” “This is why in February last year the army, after great deliberation, decided that it would never interfere in any political matter. I assure you we are strictly adamant on this and will remain so.”

He said a false narrative was created, from which an escape is sought now. Gen Bajwa said that it is impossible “or more appropriately this would be a sin” if the army would be sitting idly amid a foreign conspiracy being hatched in the country. “The Pakistan Army had enough opportunities and resources to respond to this inappropriate invasion; however, the military leadership showed courage in the larger interest of the country while refraining from making negative statements,” he said.

However, Gen Bajwa warned that everyone should keep in mind that there is a limit to this patience, “I wish to move forward by keeping aside this inappropriate and offensive behavior against me and the army.”

The army chief said that instead of welcoming the military’s decision, “many sectors used very inappropriate and undignified language while making the army the target of severe criticism.”

Regretting the use of inappropriate language by certain, the outgoing army chief said it the right of political parties and people to criticise the army, but “the language used should be [better]”.

“The army has stated its catharsis and I hope political parties will also reflect on their behaviour,” said Gen Bajwa.

“This is the reality that there have been mistakes from every institution, including political parties and civil society.” The COAS said that lessons should be learned from such mistakes so the nation could move forward.

Gen Bajwa said the country was facing “serious economic” issues and no one party could take the country out of the financial crisis. “Political stability is mandatory and the time has come for all political stakeholders to set aside their ego, learn from past mistakes, move forward and take Pakistan out of this crisis.”

He stressed the need for the nation to shed intolerance and adopt a “true democratic culture”.

Gen Bajwa rued the political parties’ criticism, first after the 2018 general elections and then again following the successful vote of no confidence this year, recalling that whoever lost branded the other as either “selected” or “imported”.

“We need to reject this behaviour,” he said. “Victory and defeat are part of politics and every party will have to develop the strength to accept its victory as well as defeat so an elected government comes in the next election instead of an imported or selected one.”

He said that if Pakistan wanted to move forward then it would need to shun intolerance and the attitude of “I don’t accept”.

The COAS lauded the sacrifices of martyrs and praised their families, saying that the army would “continue to serve and protect the country”. At the onset of the event, a tribute video was played about the recent catastrophic floods in the country and the scale of destruction they caused. The video also showcased the military’s rescue, relief and rehabilitation efforts.

Gen Bajwa also discussed the army’s performance and actions in Bangladesh during the 1971 civil war, which said were topics that most people avoided.

“I want to correct some facts here. Firstly, former East Pakistan was a political failure and not a military one,” he said.

“Against these heavy odds, our army fought bravely and gave exemplary sacrifices which were acknowledged by Indian army chief field marshal Manekshaw.”

He said the nation had yet not owned up to these sacrifices which was a “great injustice”. “Taking advantage of this occasion I salute these martyrs and will continue to do so. They are our heroes and the nation should be proud of them,” Bajwa added. Gen Bajwa will be retiring by the end of the month after commanding the army for six years. He was appointed army chief in 2016 for a three-year tenure, which was extended by another three years after parliament legislated on the tenures of services chiefs on the orders of the Supreme Court.