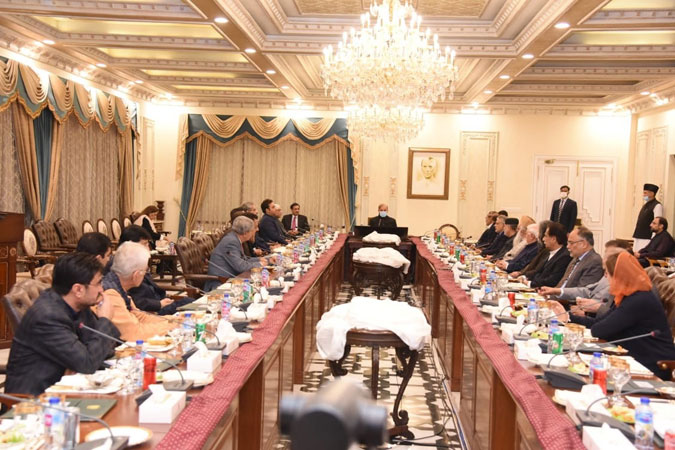 The ruling coalition partners on Wednesday entrusted Prime Minister Shehbaz Sharif with full authority to make the all-important decision on appointments of the new chief of army staff (COAS). The leaders of the coalition parties including former president and PPP co-chairman Asif Ali Zardari, JUI-F chief Maulana Fazlur Rehman and PML-Q leader Chaudhry Shujaat Hussain among others attended a high-level meeting, chaired by the prime minister. During the meeting presided by PM Shehbaz, former president and PPP Co-chairman Asif Ali Zardari entrusted his support in the prime minister and said: “You are the prime minister and the Constitution has granted you this authority and privilege.” The PML-Q supremo Chaudhry Shujaat Hussain told PM Shehbaz that decision on the appointment was his “constitutional right”. JUI-F chief Maulana Fazlur Rehman also extended his support to the premier. “We stand with you no matter what decision the prime minister takes,” he said at the meeting. Shahid Khaqan Abbasi of the PML-N said that it was a matter of pride for the party that the premier had full support from coalition partners.

Also present at the occasion, Foreign Minister Bilawal Bhutto-Zardari said: “Mian sahib, we stand with you in every decision.” MQM’s Khalid Mqabool Siddiqui also extended his support to the premier and appreciated his gesture of consulting coalition partners. Dr Khalid Magsi of the Balochistan Awami Party said that whatever decision the prime minister takes, he “firmly” stands with him. Aslam Bhootani, an independent coalition partner from Balochistan, told PM Shehbaz that he endorses his decision.