Another ‘surprise’ up the sleeve 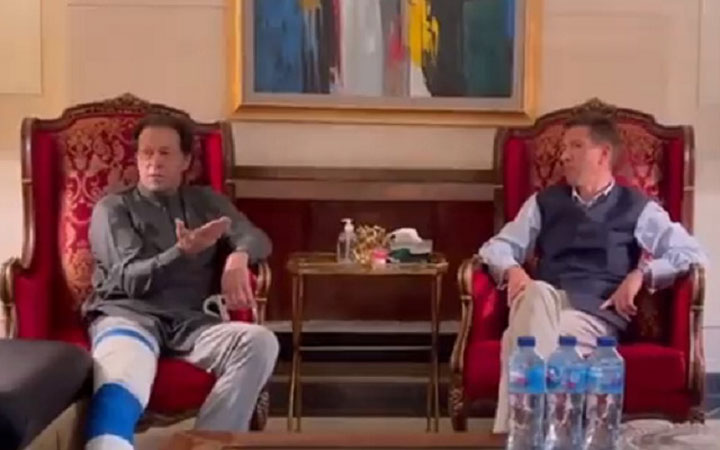 PTI Chairman Imran Khan Tuesday hinted at moving towards Islamabad after holding a rally in Rawalpindi planned for Nov 26.

In an exclusive conversation with Daily Times, the former prime minister indicated that the upcoming rally may not culminate in Rawalpindi and there are chances that it will move towards the federal capital.

Earlier, addressing a seminar via video link, Imran Khan said his party will return to power again and that it does not even need to campaign for the elections. “The condition of the country points towards voting for the PTI. The more the government delays [the announcement of general elections], the more beneficial it will be for the PTI,” he said. He said fair and free elections were needed immediately to lift the country out of the current economic turmoil and restore stability and confidence. “A government needs to come with a clear majority so that it can take bold decisions,” Imran added.

Imran Khan said he still does not understand what those allegedly behind his government’s ouster were seeking when Pakistan had come out of multiple crises. “When we found out about the conspiracy [to remove my government], I sent Shaukat Tarin to tell the neutrals that the economy would be impacted because of the political destabilisation,” he said, wondering why Sharif and Zardari families were “brought in to handle the country’s affairs”, pointing to the track record of their governments in the 90s.

Imran Khan repeated his demand for “immediate and transparent elections” in Pakistan and said that his party has to come into power. “We have to come into power. We don’t need to run an election campaign,” he said. “Unless transparent elections take place, there will be no political stability in the country,” he said, further highlighting that nothing can be done without a two-thirds majority in the parliament and that a government with “heavy majority” is inevitable.

He reiterated that no matter who comes into power, the economy can’t be improved as long as there is political instability in the country. “Investors don’t invest amid political instability,” Khan said, underlining that political stability is only possible with transparent elections. “Trust of investors could only be restored through election,” Khan added.

Criticising the PPP and PML-N, the PTI chief claimed that the country has gone downhill since the two families have come into power. “I already said that the government which has come into power will lead the country towards a default. I’m afraid they [coalition government] will take Pakistan to the point of no return,” the former prime minister said.

He added that according to a survey, 88% investors think that the government’s policies are heading towards a wrong direction. Khan alleged that rivers, forests, and agricultural land has been sold, and its money has been sent abroad. “There are mafias everywhere in Pakistan. Real estate mafia is the biggest mafia,” the former premier said.

Lashing out at the incumbent government’s performance, PTI chief Imran Khan has said any new incoming government will need to take “hard steps” to correct the country’s course

Imran said Pakistan needed to focus on how to attract investment inflows into the country and investors should be especially incentivised. He said government amnesties should only be provided to those who invest in the country’s industries.

Former prime minister Imran Khan has lashed out and alleged that the “real estate mafia” is the most powerful one in the country.

“You have no idea how much power they have,” he said, claiming that the Lahore Development Authority had informed him about the scale of the corruption in the real estate sector and how money was sent abroad from illegal plot sales.

He said multiple cases were registered on the issue but the police and government departments were bribed and silenced. Imran also said that state land was encroached upon in Islamabad and added that the state could only enforce its writ if a “powerful government” was present.

Imran Khan said that it was “very hard” for his party to survive in its first year in government and credited Saudi Arabia, China and the United Arab Emirates for their help. He said their help was “essential for us to survive”. Recalling the challenges that his government faced, such as the Covid-19 pandemic, Imran said he was “proud” of his team for how it tackled the issues.

Imran Khan assured British High Commissioner Christian Turner that his party’s protest rally or sit-in in Rawalpindi on Nov 26 will not affect the Pakistan-England Test match scheduled to be held in Rawalpindi on December 1.

Imran Khan asked the PCB chairman and the British diplomat to continue their preparations for the match, saying his movement will not affect the 5-day match. Senior PTI leader Fawad Chaudhry was also present in the meeting.