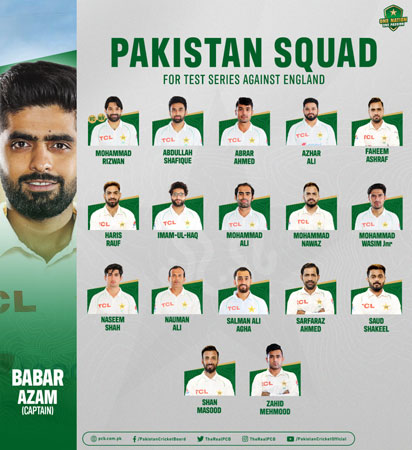 LAHORE: Pakistan cricket selectors, headed by former Test batsman Mohammad Wasim, included two uncapped players — spinner Abrar Ahmed and pacer Mohammad Ali — in an 18-member national squad named for upcoming England Tests here on Tuesday. The duo have been rewarded after their dazzling first-class performances for next month’s three ICC World Test Championship matches to be played in Pakistan. Each of the nine Test teams play six series — three at home and three away — in 2021-23 cycle. The upcoming series is Pakistan’s fifth — their last series will be the two Tests against New Zealand in December 2022 and January 2023. These three Tests will be England’s final appearance in the second edition of the World Test Championship. The first Test will begin on December 1 in Rawalpindi followed by the second in Multan from December 9 and third in Karachi from December 17. The opening Test will be England’s first on Pakistan soil in 17 years, and will go ahead in Rawalpindi as planned originally, after the potential of a political unrest had raised the prospects of a switch to Karachi.

Apart from regular quick Naseem Shah, Haris Rauf have been retained while Faheem Ashraf have been recalled for the Test series. Uncapped Mohammad Wasim Jnr and Zahid Mehmood, who were part of the Test side for the three Tests against Australia earlier in the year, are the other two players to return to the side. The selectors have dropped batsman Fawad Alam, fast bowler Hasan Ali and spinner Yasir Shah, who had been part of the Sri Lanka tour in July earlier this year. Star pacer Shaheen Shah Afridi, who injured himself in the T20 World Cup final, is not fit yet after he also got operated on recently for appendix and is undergoing rehab for his knee injury. Fawad managed 33 runs in four innings of three Tests against Australia earlier this year, while he scored 25 runs in his only Test in Sri Lanka. Hasan took five wickets in his last four Tests against Australia and Sri Lanka, while Yasir bagged nine wickets in Sri Lanka but has managed only 14 wickets in seven Quaid-e-Azam Trophy matches to date.

Twenty-four-year-old Abrar is in brilliant form in the ongoing Quaid-e-Azam Trophy. Before the start of the last round on November 20, Abrar had claimed 43 wickets at an average of 21.95. He has recorded five five-wicket hauls in six matches and has played an integral role in turning his side into serious contenders to secure a berth in the Quaid-e-Azam Trophy final. Central Punjab’s Ali has been the best fast bowler in the Quaid-e-Azam Trophy in the last two editions, taking 56 wickets. His 24 wickets, including two five wicket hauls, at 25.54 in six matches are the most for any fast bowler this first-class season. His 32 wickets at 22.78 in eight matches in 2021-22 were also the most for a fast bowler.

During a press conference yesterday, chief selector Wasim said: “There have been the usual factors considered to put together this team for this series that involves assessing the opposition, our own strengths, and the sort of conditions we are going to play at. He added the current form of the players in the ongoing first-class season had also been given considerable importance in selecting players. “I want to congratulate all the players who have been selected for the historic Test series against England. We have selected this 18-man squad keeping in mind the form of the players, the conditions and the opposition. This series has provided opportunities to Abrar Ahmed, Mohammad Ali, Mohammad Wasim Jnr and Zahid Mehmood.” He added Abrar had been on the radar since his debut first-class season in 2020-21. “He is in outstanding form this season, so it makes sense to make him available to Babar Azam so he can use the confidence and talent of this youngster in the upcoming series. Zahid is another bowler who has been in the plans. He has shown improvement over the years and has been part of the successive squads.”

Wasim said Pakistan had boosted their fast bowling stocks with the best available talent. “There is no doubt about the skills of Mohammad Wasim Jnr. He moves the new and old ball laterally at high pace, which is a huge plus for any side. Mohammad Ali has shown great patience and control, and his numbers speak for his consistency. He has been our best fast bowler in the Quaid-e-Azam Trophy with 56 wickets at an average of 24 over the last two seasons. I am confident that this team will ensure that the upcoming Test series against England will end in the same manner as it did when they last toured Pakistan in 2005.”