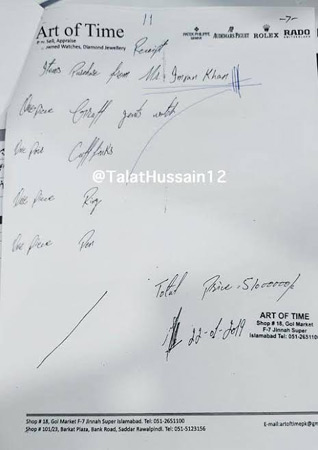 PTI leader Fawad Chaudhry Wednesday said that the Toshakhana gift was “legally” sold “in the market”. He began the media talk by sharing details about the Graff wristwatch in question. Elaborating on the procedure for receiving state gifts, he said the Saudi king gifted the watch during Imran’s trip to Saudi Arabia in 2018 when the PTI chief was the prime minister. Following due procedure, the watch was deposited in the Toshakhana department and its price was valued at approximately Rs 100m, Fawad added. At the time, he recalled, public office holders could pay 20pc of the evaluated price of a gift and retain it. “Imran Khan paid 20pc of the evaluated price and it became his personal property,” Fawad contended, revealing that the watch was later “sold in the market for approximately Rs57m. “Capital gains tax was paid for it accordingly and it was declared in Imran Khan’s returns as well as before the election commission.” The watch, he asserted, was never sold to anyone named Umar Zahoor. “Neither was it ever handed over to Farah Gujjar for selling … and Ahsan Saleem Gujjar, who is Farah’s husband, clearly said [last] night that she never met him (Zahoor).” In this connection, Fawad also highlighted Zahoor’s “very shady history”.

Zahoor is said to be an influential business personality and is apparently wanted by Norway, Switzerland, Turkiye and Pakistan since 2009-10 over various financial and other crimes. The businessman also stands accused of taking his minor daughters abroad illegally after obtaining their passports under fictitious names and parentage, even though the Lahore High Court had already ordered that his name be placed on the Exit Control List. Building his case on the basis of this information, Fawad alleged that Zahoor had named Akbar because the former accountability minister wanted his return to Pakistan. But soon after the government changed, a first information report was registered against Akbar and late Federal Investigation Agency director Mohammad Rizwan at Islamabad’s Kohsar police station, he said. “Later, Zahoor’s name was removed from the ECL (Exit Control List) and a month after that, he holds this press conference.” Speaking at the press conference, Zulfi Bukhari said that former president Asif Ali Zardari and ex-prime minister Nawaz Sharif also took gifts from Toshakahan but no uproar was witnessed when they did it.