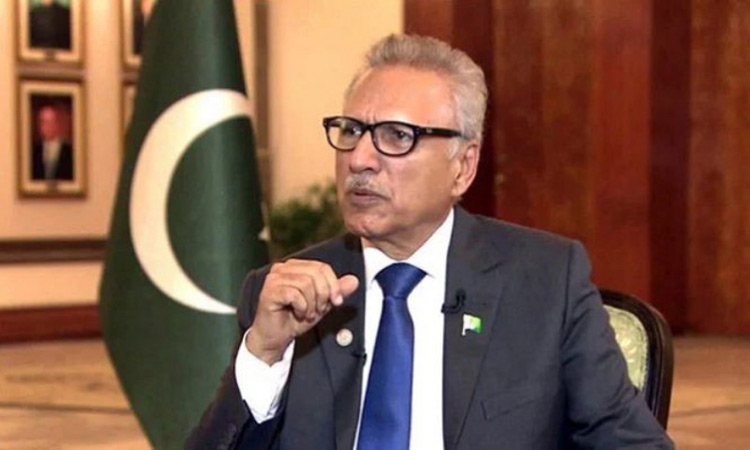 President Dr Arif Alvi on Tuesday said that when the laws were not applied justly and objectively according to their true spirit, intent and purpose, it created distrust and polarisation in society, and stressed that it should be avoided.

He said that all the pillars of the state, the parliament, judiciary, and government should endeavour and ensure the right and accurate application of the laws in all situations and on all persons at all times equally and fairly.

The president expressed these views while talking to senior officers of the National Command Authority (NCA), at Aiwan-e-Sadr, President Secretariat Press Wing said. He said that there was a need for political stability, the continuation of the policies, adoption of innovation, and research and development in all sectors, especially in science and technology, increasing the quality and quantity of human resources in IT sector, providing quality and pertinent education in schools and madrassas, bringing 25 million out of school children to schools.

“These steps would help in ensuring speedy development and progress of the country,” he added.

The president said that the entire world was in dire need of graduates in the information and technology sector and those nations that succeeded in providing IT graduates speedily, both in terms of quality and quantity, were making progress in the highly competitive environment. He said that Pakistan should take all possible steps to increase the quality and quantity of its IT experts to provide much-needed human resources to the country and to increase the IT-based exports internationally, which could provide much-needed relief to the country’s foreign exchange reserves. He said the right decisions made at the right time, quality decision-making, intellect and knowledge of the country’s scientists, trained and capable human resources and persistent efforts in the right directions would help lay sound foundations for the development and prosperity of the country.

While highlighting the importance of cyber security, the president said that in the near future all the defences and deterrents of any country would have cyber security at its central place as it would be required to safeguard and protect national data, ensure uninterrupted provisions of services, safeguard critical national infrastructure and to shield the country and its people from the threats of cyber warfare. This, he said, would need intellectual and human capital, knowledge, innovation and determination compared to the capital-intensive brick-and-mortar defence systems.

Talking to the officers, the president highlighted the importance of artificial intelligence and quantum computing, adding that it should be adopted at all levels and at all forums and be persistently promoted until it was fully embraced by the education, research, and other relevant institutions in the government and private sectors. He further said that it would help provide a much-needed impetus and would speed up our efforts to turn our country into a fast-developing country. The president said that innovations in the field of computer sciences and other disciplines of science and technology were happening at a rapid pace, adding that quantum computers were thousands of times more powerful than supercomputers and their usages would bring revolutionary changes in all fields. He said that the data generated by humans all around the world was enormous compared to the ability to analyse, interpret and make use of this data.

Processing the huge volume of data was only possible by the use of quantum computers and artificial intelligence, he added.

The president said that a high-level body may be formed to provide leadership in artificial intelligence and quantum computing so that a definite direction was provided to the relevant institutions and departments for moving forward. While replying to a question, the president said that 60 to 70% curriculum should be uniform across the country while the rest should be flexible to promote and preserve regional languages and cater to the preferences and needs of the provinces. Responding to a query, the president said that any society derived its strength from its religious teachings and values, the constitution of the country and the laws and regulations.