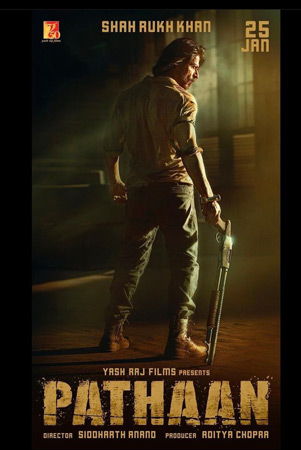 Shah Rukh Khan is all set to be back on big screen and superstar doesn’t feel nervous about Pathaan at all. His last film Zero was not a success at the box-office yet at an event in Sharjah, the actor expressed his belief in his art. King Khan attended Sharjah International Book Fair (SIBF) at Expo Centre in Sharjah where he received Global Icon of Cinema and Cultural Narrative award at the event. He was asked if he’s nervous about being back to the big screen.

To which he said, ‘People think I am pompous if I answer it the way, I answer honestly. I don’t think I need to be nervous. They all are going to be superhit films. I would like to explain the lack of arrogance in this statement–that’s the belief I sleep with and wake up with. That is the belief that makes me, at the age of 57, go do stunts, jump, work 18 hours a day. Because if I did not have the belief, at the end of it all, I am doing to make a great product lots of people are going to like, I would not be able to do it.”

He further added, ‘This is not an arrogant statement this is what I believe as I sit there. I am not nervous. I think they are wonderful films. it’s a child-like belief, that look ‘I have done my best, prepare my best. I am going to pass with flying colours.’

In this conversation, he also shared a very interesting analogy from his childhood, involving his math exam and his film Dilwale Dulhania Le Jayenge.

“It happened to lots of us, at least to me, when I was a young kid. I remember acing my mathematics exam. I did very well and in result, I got 3 out of 100. But, I thought I really did well. Sometimes that happens with movies also. I do make a Zero, sometimes what I put in comes to effort and for, and it becomes Dilwale Dulhania Le Jayenge.” He said. He also stated that he is very excited to see himself back in the game. Pathaan will be out in theatres on 25th January.