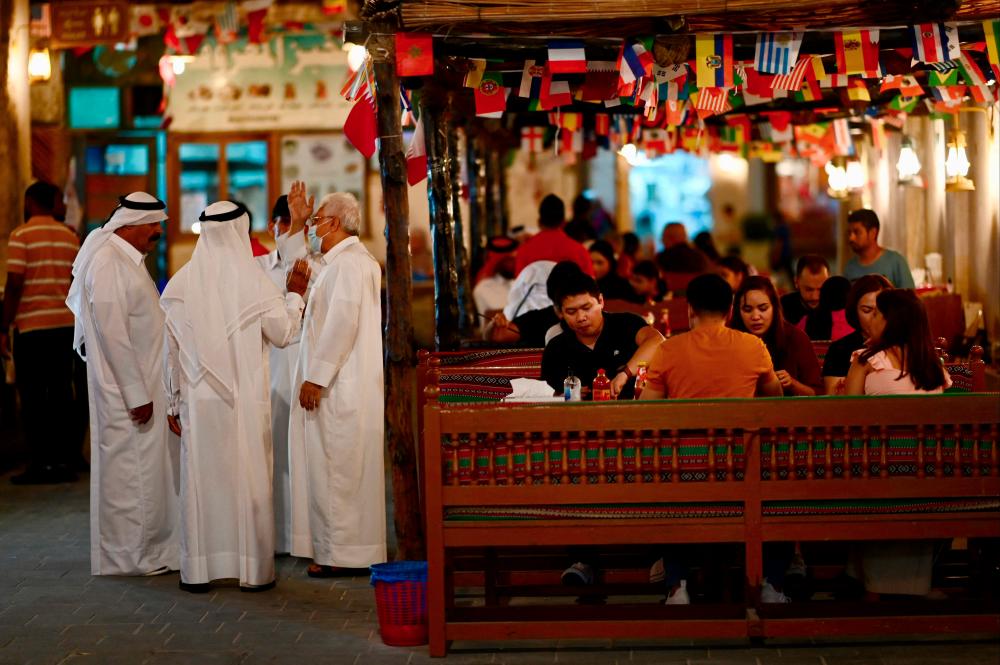 Here are some of the cultural conventions football fans should know when visiting the gas-rich Gulf emirate, which, like other Arab nations, prides itself on its hospitality.

In public places, it is customary to stand up when greeting others, particularly the elderly, as a sign of respect.

When men are greeting Qatari women, it is best to wait for them to take the lead before reaching for a handshake. Some prefer to avoid physical contact with members of the opposite sex, often for religious reasons.

By the same token, Qatari men might not always offer a handshake when meeting women.

Instead of a handshake, Qataris often place their right hand over their heart as a warm gesture of greeting.

Public displays of affection, including kissing, should largely be avoided. Holding hands, however, is generally accepted.

While the use of English is ubiquitous in a country that is 90% expat, knowledge of basic Arabic greetings and expressions of gratitude is greatly appreciated by Qataris.

If you are lucky enough to be invited into a Qatari home, remember to take off your shoes before entering the house.

When sitting with your legs crossed — in any setting — it is considered rude if the soles of the feet are facing the host.

It is common for Qataris to eat by hand from large communal plates placed on the floor — a dining etiquette that dates back to Bedouin desert culture.

And it is important to accept offerings by Qatari hosts, as turning them down could be taken as an offence.

Qatar shares the Gulf passion for Arabic coffee, which is prepared by roasting coffee beans and then boiling them with cardamom and saffron.

The yellowy, tea-like brew is poured out of traditional, long-spouted “dallah” pots into miniature cups and often served with dates.

The dallah, a cultural symbol across much of the Gulf region, is even erected as a monument in public spaces.

When served to guests, it is customary for hosts to try the coffee first, to test for taste.

Guests must always drink with their right hand. The coffee keeps coming until you wave your cup to signal you have had your fill.