The fight for ‘period justice’

* 'Periods do not stop with floods' is underlying message of Mahwari Justice, a student-led grassroots movement working to distribute menstrual hygiene kits to flood-hit people 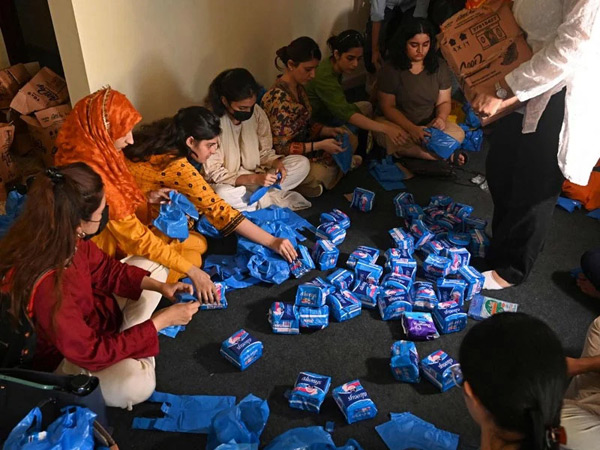 As Pakistan continues to reel in the aftermath of this summer’s floods, one student-led grassroots movement is spotlighting an often-overlooked and highly stigmatised aspect of disaster relief: menstrual needs.

Periods do not stop with floods – that is the underlying message of Mahwari Justice, a student-led grassroots movement working tirelessly in Pakistan to distribute menstrual hygiene kits to people affected by the disaster.

The organisation was co-founded by Bushra Mahnoor, a 22-year-old studying psychology in Lahore, and Anum Khalid, a 23-year-old architectural engineering student in Multan, both of whom feel passionately about coming to the aid of women whose struggles are inevitably amplified in times of crisis. With the help of donors and volunteers, Mahwari Justice is assembling kits that contain sanitary pads as well as hygiene essentials like soap, detergent and underwear while advocating for more sustainable menstrual options in order to minimise their carbon footprint.

Simultaneously, they’re speaking up to end the stigma around menstruation in Pakistan – and they aren’t trying to be discreet either.

The name Mahwari Justice is derived from the Urdu word for menstruation, mahwari, thereby encouraging frank discourse as opposed to using euphemisms. Naturally, criticism come with the territory, but the organisation is taking any backlash in stride, focusing instead on the needs of 40,000 female flood victims to date.

FairPlanet spoke to Bushra Mahnoor and Anum Khalid about the small joys and overwhelming challenges of their new roles.

Can you share the backstory of how Mahwari Justice came about?

Bushra Mahnoor: We started Mahwari Justice about three months ago in the flood-hit areas of Balochistan after we received a call from a woman in Lasbela. She told us that she had two daughters, both of whom had been using the same old rag to manage their period. Hearing that, knowing that they don’t have the basic necessities, was extremely heartbreaking. In fact, multiple women are sharing the same rags because of the circumstances.

When we dug deeper into this issue and contacted other people in flood-affected areas, the stories were even worse: we were told that women were bleeding in the open because they had nothing left. That was essentially the incentive behind Mahwari Justice.

Additionally, this call took me back to when I was 10 years old. It was the year 2010, when floods hit Pakistan over the summer. I’m from the city of Attock, and a lot of nearby villages had flooded. This one time, I was visiting a flood relief camp and saw a little girl who was about my age. Her clothes were stained with blood. My mother approached that little girl and got to know that she had gotten her first ever period while she was displaced.Earlier this year, when we got the news of these floods, the image of that little girl came to my mind. I instantly thought that, once again, there will be thousands of other girls who are going to have their first period in this situation. And since periods are stigmatised – there is a lot of taboo associated with it – not enough people are going to pay attention to it.

How are menstrual needs addressed during emergencies in Pakistan?

It is very easy to forget that while flood victims need food, shelter, water and medicine, they also need assistance with their periods.

Anum Khalid (AK): It’s true. A friend of mine recently visited a medical camp in Dera Ismail Khan, and reported that thousands of women are experiencing terrible vaginal and urinary tract infections of different intensities. To think that we can’t even bear a rash on our skin while they’re suffering and in pain. It’s terrible.

Of course, the dirty water around them is a major reason, as is the fact that they have no access to menstrual hygiene products. And if we don’t discuss these matters, we’re actively ignoring women’s health.

Women will continue menstruating during this time, they’ll continue giving birth, so how can anyone not consider period products a basic need?

Considering the subject of menstruation is still a taboo in Pakistan, what kind of reactions have you received, both positive and otherwise?

BM: When we first launched Mahwari Justice, we reached out to people in flood-affected areas – men, primarily. And they flat out said they weren’t interested in liaising with us because our work was not the kind they can support. And I would question them because I was appalled. This was the first problem.

We also received a lot of backlash from people who would say that period products are a luxury, not a need. In fact, here in Pakistan, they’ve imposed a luxury tax [on period products]. This is a major problem.

Elsewhere, people would refer to us as ‘shameless,’ declaring that our work should be carried out in private, which is a ridiculous notion because there were literally millions of women bleeding during the flood. And they continue to. And they need medical assistance, so our work cannot be done in a secretive manner.

Another reaction we received is that we’re wasting funds that could’ve been better spent on food, medicine and shelter. We would then emphasise the fact that we’re advocating for ‘food and pads’, not ‘food or pads’ – these things are not mutually exclusive. This was our strategy from the beginning as well; we would ensure that each ration bag being delivered to families contains at least one period relief kit. And that’s nothing compared to the need, considering there are often multiple women within a single household.

As for our resources? Because we’re not an NGO, we don’t have any organisational support either. Not only are we just two students who started this campaign, but we’re also the students at public universities. Then came the criticism from our families. I’m one of five sisters, so there are six people in my family who bleed every month – and despite that fact, we do not talk about periods openly in our home. Even the word mahwari isn’t said aloud. But the reality is that if we don’t speak up, who will? Somebody has to step up. Somebody has to break the taboo.

Having said that, we are slowly seeing a shift in mindset, so we’re not only helping flood victims – we’re also working to end the stigma. A few weeks ago, we held a packing session for the supplies in Lahore, calling for volunteers to help us assemble relief kits before they’re delivered to flood-affected areas.

One of the volunteers was a middle-aged man who came with his daughter, and they both packaged these kits together. Such a sight in a country like Pakistan brought tears of joy to my eyes. This is the revolution we talk about.

Do you engage with your critics and educate them in the process or are you simply picking your battles?

BM: The temptation to engage does exist. When we started this campaign, there was a huge Twitter debate – people were talking about whether sanitary pads should be sent or not. Even at that time, Anum and I learned from the criticism, so now, there are actually four kinds of kits that we are donating. But, yes, there was certainly temptation to engage with the critics – there were times we wanted to scream at the stupid things they said, but we would not. At the end of the day, I only have 24 hours in a day and I would rather spend those hours helping women in need rather than engaging with those who have nothing better to do than sit inside their homes with their phones in their hands.

What are some of the day-to-day challenges faced by women that we aren’t privy to?

AK: Now that the active flooding has stopped, women who have recently given birth are using sun-dried cow dung between their legs in order to manage heavy postpartum bleeding. It is extremely, extremely shocking. There are a number of women who are pregnant or have given birth in these circumstances. We’ve seen multiple women carrying babies who are only two or three days old. The fact that women are compelled to use such unhygienic options is heartbreaking. We are trying to reach out to them, but of course, there are a lot of challenges. Young girls, for example, hesitate to use the shared bathrooms in overcrowded relief camps because of the shame that comes with wearing blood-stained clothes. Further challenges arise from women feeling reluctant to accept supplies when there are men around, so we bring them to one side and forbid the presence of any men – locals and volunteers – before distributing the period kits. is.