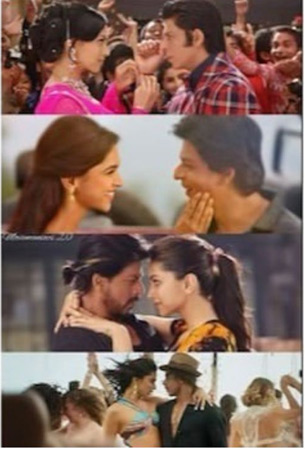 Shah Rukh Khan took to Instagram on Friday to wish Deepika Padukone on completing 15 years in the Hindi film industry. Deepika made her debut alongside Shah Rukh Khan in Farah Khan’s Om Shanti Om. Shah Rukh shared a collage of photos featuring him and Deepika from their many collaborations.

After Om Shanti Om, Deepika and Shah Rukh worked together in Rohit Shetty’s Chennai Express and Farah Khan’s Happy New Year. The two had a dance number in SRK’s production Billu as well. In 2018, Deepika appeared for a cameo in Zero, along with many other female actors.

The two will next be seen together in Siddharth Anand’s Pathaan, which also stars John Abraham. During a recent #AskSRK session on Twitter, Shah Rukh praised Deepika and said she has a ‘calming effect’. He said, “Apart from her amazing capabilities as an actor and star…the calming effect that she has on the whole film is amazing.”

Director Siddharth Anand recently said in a statement, “The on-screen jodi of Deepika and Shah Rukh Khan is probably one of the biggest pairings that Indian cinema has ever seen, given their incredible successes in the past. And in Pathaan, we have presented SRK and DP in a way that’s unprecedented.” Pathaan, which marks Shah Rukh Khan’s comeback to the movies, released its trailer recently. The film is scheduled to release on January 23.