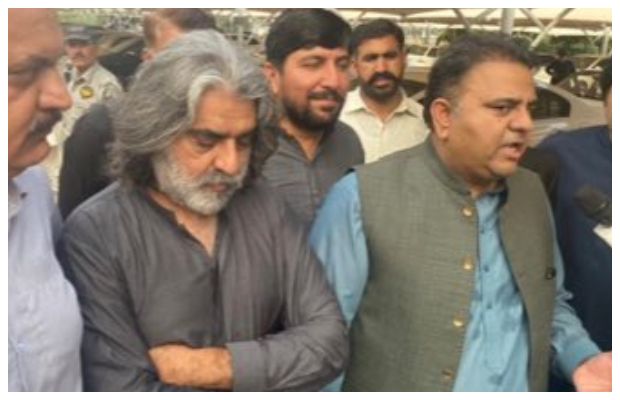 Explaining the reason for his dismissal, Khan said he violated party policy and spoke to the media against the party’s version without prior permission.

“From now on, he is no longer in the PTI,” he said, as he advised media personnel not to consider him a party leader and instructed government officers and officials not to entertain him. .

PTI senior vice-president Fawad Chaudhry had yesterday claimed that Rokhri was not a member of the party and asked: “Who is this?” But despite Rokhri’s claim that he is not a party leader, his suspension notification has been issued.

A day earlier, PTI leader Major (retd) Rokhri debunked allegations against a senior army officer, saying he was a man of principles.

Rokgri while posting the suspension notification on Twitter questioned why they act in hastily? Why they did not issue any show cause notice or sought answer?

Rokhari said the officer was two-course junior to him and knew him very well.

He said at a meeting at Bani Gala, it was said the general officer was tasked with crushing Imran Khan’s narrative and the PTI.

However, Rokhri said that he interjected in the meeting and told the PTI leadership that the officer was a thorough professional and a man of principles who would not sell his conscience and honour to please anyone.

Rokhri said that when he asked the officer if he had been tasked with crushing the PTI, he responded: “What are you talking about; don’t you know me? I was posted (to this office) on Gen Sarfraz’s martyrdom day. Imran is the leader of the country’s largest political party and a hero. Why would I go against him? If some people are telling Imran things like this, tell him there is nothing like this.”

The PTI leader also said that he met the officer for a third time, along with Salman as Imran’s spokesperson. He added that the meetings with the officer took place after Shahbaz Gill’s incident.