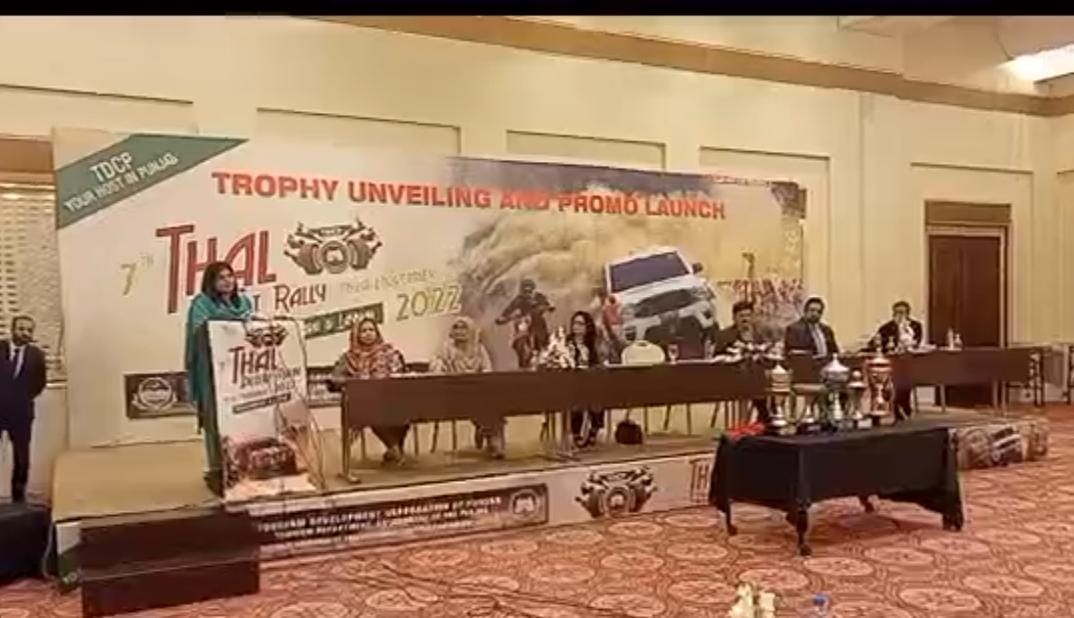 The Tourism Development Corporation of Punjab (TDCP) has unveiled the trophy for the 7th TDCP Thal Desert Rally at a ceremony held on Thursday at a local hotel.

The 7th TDCP Thal Desert Rally will be held on 17-20 November 2022. More than 100 professional drivers will participate in nine categories of the rally and a motorcycle race will also be organized on the occasion.

Secretary Tourism Punjab Ms Asia Gull was the chief guest. Addressing on the occasion she said that Tourism Development Corporation of Punjab (TDCP) is going to organize the 7th Thal Desert Rally in 02 districts, Muzaffargarh and Leya with the aim of introducing it as a winter tourist destination and promoting motor sports in Pakistan.

The seventh Thar Desert Rally will be held on 17-20 November 2022 in Muzaffargarh and Leh districts. The desert stage is set for a sensational event that will highlight the regional culture and colors. The event will also contribute to the socio-economic development of the region where the rally drivers will showcase their skills in the three-day event.

More than 100 professional drivers, including women, will participate in 10 categories of the rally. The track of the rally covers 200 kilometers and the jeep covering the distance in the least time will be declared the winner. A motorcycle race will also be organized. In which more than 20 dirt bikes will participate.

On the days of the jeep rally, there will be a cultural night in Chobara District Leh, fireworks display. While the prize distribution ceremony will be held at Faisal Stadium, Muzaffargarh. In each category, the first, second and swimmers will be given trophies and cash prizes.

Today in a local hotel in Lahore, the unveiling of the rally trophy, promo launching and media briefing was held. In which the media was informed about the arrangements and characteristics of the rally. Secretary Tourism, MD Tourism, drivers and media were present at the ceremony.