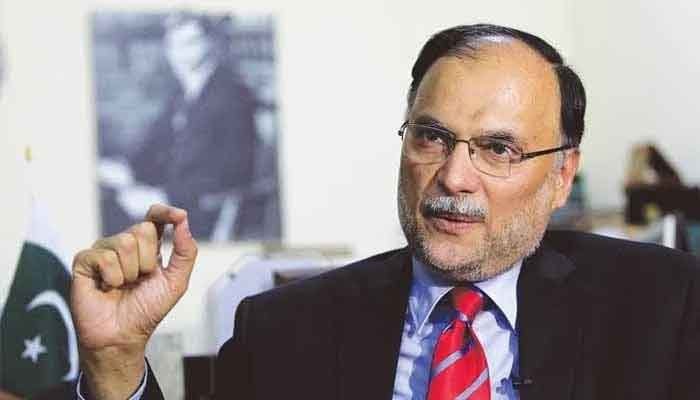 Minister for Planning, Development, and Special Initiatives Ahsan Iqbal said that the nation is on the edge and the federal government might use its authority to impose governor rule in Punjab.

The minister made this statement a few hours after Pakistan defeated New Zealand on Wednesday to advance to the championship match of the ICC Men’s World Cup, which is taking place in Australia. Pakistan’s success was noted by the minister. He used the opportunity, though, to criticise PTI Chairman Imran Khan.

Talking indirectly about Imran Khan, He said, “I wish the cricketer had also played a part in creating unity in the nation.” He stressed that cricket unites the nation.

Pakistan has surmounted major challenges by standing united on many occasions and the 18th Amendment, CPEC, and the National Action Plan are some examples to prove it, he said.

Iqbal said that Prime Minister Shehbaz Sharif is mobilizing the international community using opportunities like the COP27 following the massive flood catastrophe that hit the nation earlier this year. The disaster caused losses worth a whopping $30 billion to the country, he said.

‘There is one person,’ the federal minister said, clearly referring to Imran Khan, who insists on causing chaos within the nation to fulfil his ego. The minister added that except for this individual, the entire nation stands together on the other side.

He said that if the government surrenders to Imran Khan, several other groups will also advance their agendas. So, the government will have to run the country in line with the law, he said.

The PML-N leader said that it is unfortunate that Imran Khan considers himself above the constitution of Pakistan as no one can ask him about matters like foreign funding and the Toshakhana case.

“We appear before courts and inquiry bodies even if we have false cases against us. But, Imran Khan cannot appear before the FIA,” he asserted. He urged Imran Khan to abide by the law since he talks about one law, not two.

“The PTI is taking unfair advantage of its provincial government, by resorting to political hooliganism. They are making people’s lives miserable by blocking roads,” he said.

PTI activists are mistreating regular citizens by shutting several sections of the GT road. He asserted that an effort is being made to damage the nation’s entire economy.