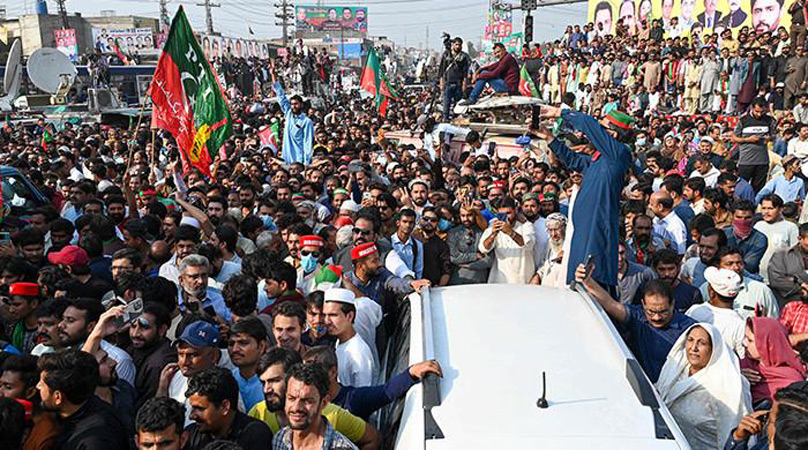 As the time for PTI’s long march to resume approaches, the party’s central leaders Wednesday resolved to continue marching from the same spot in Wazirabad where the party chairman Imran Khan was injured during an attempted assassination.

PTI, during a meeting presided by Khan in Lahore, decided that the “Haqeeqi Azadi” march would move toward Rawalpindi from the spot following a public gathering. In a statement, the PTI said the party’s leaders from Faisalabad and other parts of the country would advance toward Rawalpindi in groups, while more convoys will reach the city in the third week of November. The party’s briefing stated that a three-member probe committee would be formed by tomorrow, which will provide an investigation done by local police to the joint investigation team.

Following its meeting, the PTI stated that the party only has one demand: elections should be conducted as soon as possible. The party has also demanded all assemblies be dissolved and a way for immediate elections be paved across the four provinces. During the meeting, party members also passed a resolution in favour of Khan, while all elected members of PTI in the Centre, four provinces, as well as Azad Kashmir, and Gilgit Baltistan altogether would request the Supreme Court to register a first information report (FIR) against the attack on their party chief.

They demanded that the assemblies should be dissolved for early elections to pave the way for immediate elections in all four provinces. PTI senators, members of the National Assembly, members of the Provincial Assembly will go to the Supreme Court to register the FIR of the attack in Wazirabad.

During the meeting, matters pertaining to the country’s overall political situation, next phase of Haqiqi Azadi March and other important issues came under discussion. During the meeting, Punjab Home Advisor Umar Sarfraz Cheema presented the preliminary forensic report regarding the Wazirabad attack to the party leadership. Speaking to the media after the meeting, Umer Sarfraz Cheema said that the forensic report of the incident revealed that there were more than one attacker, while an attempt to create religious narrative against the former PM has completely failed.