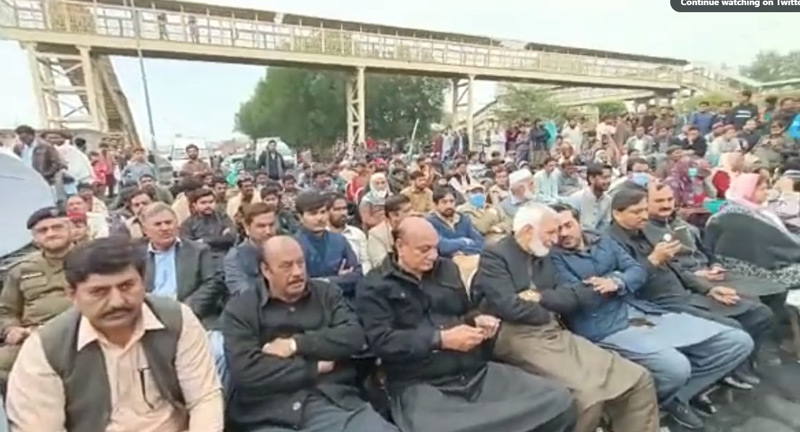 The party has been protesting against the federal government over the assassination attempt on former prime minister and party chairman Imran Khan. PTI workers have been staging a sit-in at 12 spots in Rawalpindi including, Murree Road, Shamsabad, Old Airport Road, Gulzar Quaid, IJP Road, Rawat-GT Road, Taxila-GT Road, Margala Chowk, Fateh Chowk and other key intersections. The biggest protest, being led by Fayyazul Hassan Chauhan, is being staged on Murree Road in Rawalpindi. PTI activists blocked the road by placing a row of chairs and burning tyres. PTI activists also blocked the road leading to the Islamabad International Airport (IIA) by placing tyres across it and setting them alight.

Parliamentary Affairs Minister Basharat Raja tweeted a video from the Inter-Junction Principal Road (IJP) road in Islamabad, where party supporters were seen watching Pakistan’s T20 World Cup semi-final against New Zealand on a big screen on Wednesday. The provincial minister also wished the Pakistani team and captain Babar Azam luck for the match. “Today is the third day of sit-in at the entry and exit points of Islamabad. I am enjoying #PakvsNz cricket match at IJP road along with PTI workers. Wishing Babar Azam and the team prayers & best wishes from the people of Rawalpindi,” said Raja. Earlier, supporters of the PTI blocked roads near the capital disrupting traffic and forcing schools to close, as they protested against a bid to assassinate their leader, Imran Khan, at a recent anti-government rally. The PTI chief, who has been pressing for a general election since he was ousted as prime minister after losing a confidence vote in parliament in April, was shot at the rally last Thursday. He is recovering from leg wounds.