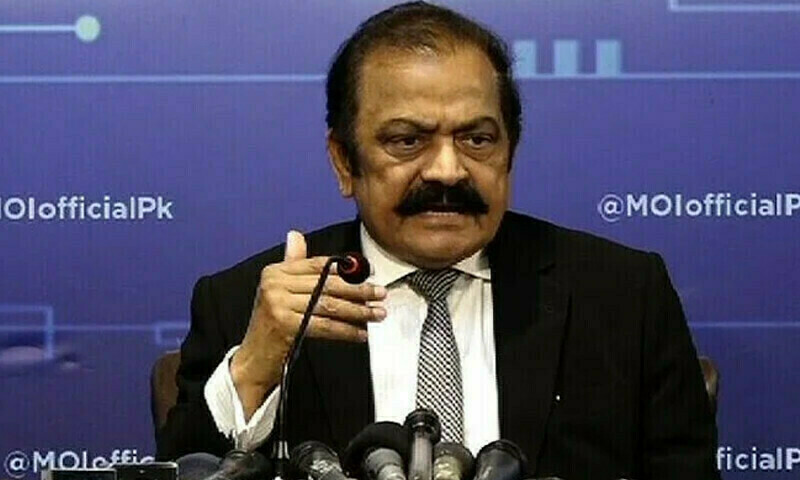 Interior Minister Rana Sanaullah on Wednesday asked the provincial government of Punjab and Khyber Pakhtunkhwa to open up the national highways.

He also called on the chief justices of the apex and high courts of Punjab, Islamabad and Peshawar to take notice of the protests, saying that the people causing trouble for citizens would later approach the court for relief. He said that a handful of protesters were agitating in various districts of Khyber Pakhtunkwa as well as Punjab and causing inconvenience for citizens. The nation had rejected the PTI’s “ fitna march” and I apologized to the people affected by the march on behalf of the federal government, its allies and prime minister, Rana Sanaullah added.

He said that the protesters were burning tyres and blocking roads. Later, they film videos to show that a sea of citizens is protesting, he said adding that citizens were being prevented from going to the hospital, picking up their children from school and running important errands. He said that at some sites, the protesters had blocked roads from both sides and police is assisting them by placing barriers. Citizens have shown resentment on such attitude of PTI’s protesters and situation would be tense if people started reacting over such protests, he added.

He said that only one suspect, Naveed, had been arrested for involvement in Wazirabad incident and there was no other suspect. He said that suspect had the same motivations as those behind the attacks on Ahsan Iqbal and the attack on Khawaja Asif. The minister said the suspect was self-motivated and was not a part of any political or religious party.

All the people he was linked to and in contact with are being investigated, and maintained. Regarding the allegations of Imran Khan about Wazirabad incident and his wish to include three personalities in it, the minister said there must be some sort of evidence for the first information report (FIR) to be registered, otherwise, anybody would be free to lodge complaint against their opponents. By that argument, someone can ever register a case against the chief justice, the minister added.

To a question, he said that Prime Minister as per his information has written to Chief Justice of Pakistan for judicial commission to examine the assassination attempt on PTI chief Imran Khan and Arshad Sharif case. He requested Chief Justice of Pakistan to consider the appeal of the mother of journalist Arshaf Sharif and form a commission as per her satisfaction to investigate the case.

Rana Sanaullah said: “Arshad Sharif’s death is not a case of mistaken identity – I can say, and, on the evidence we have so far, this prima facie is a target killing.”

“We still need to obtain more (evidence) to confirm all this … and we have asked the Kenyan government for more data,” he added.