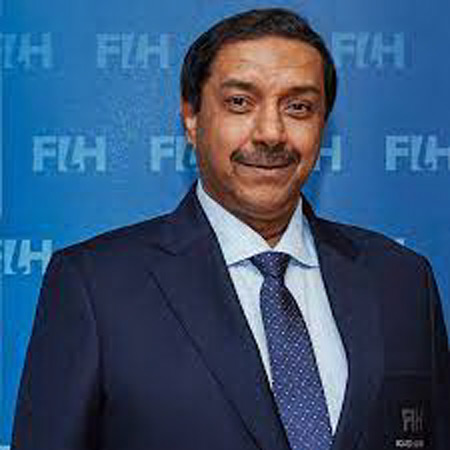 LAHORE: Pakistan’s Tayyab Ikram has become the new head of the International Hockey Federation (FIH) after defeating Belgium’s Marc Coudron in the Presidential election. Ikram, who is also the Asian Hockey Federation Chief Executive Officer, defeated his Belgian rival 79-47 in the virtual FIH Congress on Saturday. The Pakistani official, who now resides in Macao, has secured a two-year term as head of the organisation, completing the mandate of India’s Narinder Batra who resigned in July. A total of 129 national associations participated in the Congress, with 126 casting votes. The FIH Executive Board consists of a President; eight ordinary members — four female and four male — one half being renewed every two years; an athletes’ representative; Presidents of the Continental Federations; CEO; any (non-voting) member co-opted onto the Executive Board pursuant to Article 7.1 (c) of the FIH Statutes.

The Pakistan Olympic Association has congratulated Ikram on becoming new head of the International Hockey Federation. “Mr Ikram has a lifelong association with the sport of hockey as an athlete, coach and official, and has held various leadership roles in organisations promoting hockey across the world. POA President Lt Gen (r) Syed Arif Hasan and the entire Olympic family of Pakistan felicitate Mr Ikram on his successful election and wish him the very best in his future endeavors,” said a spokesman for the POA yesterday.

Ikram has become the first Pakistani official to lead an Olympic International Federation since Anwar Choudhry was President of the International Amateur Boxing Association from 1986 to 2006. It is the second time that former Royal Belgian Hockey Association President Coudron has lost in the Presidential election following his narrow defeat to Batra in May 2021. Egypt’s Seif Ahmed has been Acting President since Batra announced his resignation. Batra also quit as head of the Indian Olympic Association (IOA) and member of the International Olympic Committee (IOC), citing personal reasons.

His decision followed a Delhi High Court ruling in June that Batra should stop acting as IOA President in a case related to his controversial position as life member at Hockey India. Ikram has been on the FIH Executive Board since 2016 and also holds roles within the Olympic Council of Asia, sitting on the Coordination Committee and being vice-chair of the Athletes’ Committee.

At the IOC, Ikram is also a member of the Olympic Solidarity Commission and the Athletes’ Rights and Responsibilities Declaration Steering Committee. Ikram revealed that the first call he received following his election was from IOC President Thomas Bach which, he claims, emphasises the importance of sport in the Olympic Movement. But Ikram stressed his determination to take the FIH in a “new direction” as they look to continue to grow the hockey fan base.

“The message is very clear after I had a huge interaction with the global family,” said Ikram. “I heard them and I think based on those suggestions we have to create a vision. Personally, I am a man of development, engagement and empowering the National Federations no matter where they are. I believe that we have to create that strong connectivity with all our stakeholders and members. We need to create a very professional set up for our athletes, not only for their performances but better opportunities for them. We need to stay in the Olympic programme and we have to improve our status. Our previous leadership has already started and that is on sustainability, so how we can protect our environment and how our sport is presented in a way that we are contributing to those sustainable goals.” The FIH Congress also saw Maureen Craig-Rousseau of Trinidad and Tobago and Ghanaian Elizabeth Safoa King retain their places on the organisation’s Executive Board following re-election. They will be joined by Hiroya Anzai of Japan, Piotr Wilkonski of Poland and South Africa’s Deon Morgan who have been elected for the first time as members.