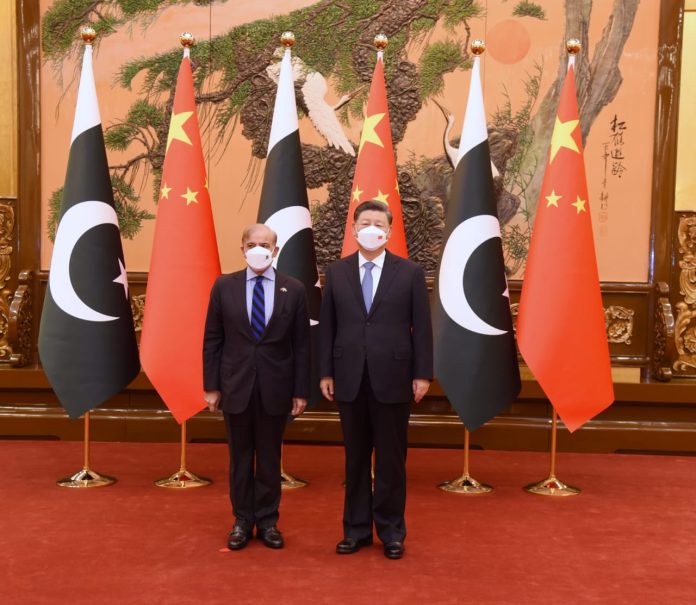 The two leaders met at the People’s Great Hall of China and discussed broad-based cooperation in economy and investment besides exchanging views on regional and global developments.

PM Sharif and President Xi expressed the desire to further promote the All-Weather Strategic Cooperation Partnership between their countries.

Shehbaz Sharif, who arrived in Beijing Tuesday on a two-day official visit, is among the first leaders to visit China following the historic 20th National Congress of the Communist Party (CPC) of China that elected Xi Jinping as general secretary of the party.

PM Shehbaz is on a two-day official visit with a high-level delegation at the invitation of Premier Li Keqiang. The meeting was primarily aimed at revitalising the CPEC project.

The meeting took place at China’s Great Hall of the People during which the two leaders discussed the broad-based cooperation in economy and investment.

Both the leaders exchanged views on regional and global developments. They also held discussions to further strengthen the strategic partnership between both countries.

Before departing for Beijing on November 1, the premier said that he was “honoured to be among the first few leaders to have been invited after the historic 20th National Congress of the CPC”.

He said that the second phase of CPEC is expected to usher in a new era of socioeconomic development that will improve the standard of living for our people.

The premier also said that there is a lot to learn from the Chinese economic miracle.

“At a time when the world is grappling with multiple challenges, Pakistan and China stand together as friends and partners,” he said.