First Lady Begum Samina Arif Alvi on Monday urged all citizens, particularly women and girls, for creating awareness about breast cancer as early detection of the deadly disease could save millions of precious lives.

She while addressing a breast cancer awareness event at St. Joseph College for Women in Karachi said that breast cancer- though a curable disease- was causing loss of millions of lives every year only because of lack of awareness and timely treatment.

Begum Samina Alvi said that in Pakistan approximately 90,000 new cases of breast cancer were diagnosed every year while mortality rate due to the fatal disease was also very high.

Late diagnosis was the major cause of high mortality rate due to breast cancer in the country, she noted, adding that it was a social stigma or taboo to speak about the disease and that results into delayed diagnosis, enhanced complications and in a number of cases into death of the patient.

Breast cancer was not an incurable disease as it had over 98% survival rate if diagnosed early in the first or second stage, she said and stressed on mass awareness about the disease to sensitize women and girls about signs, self-examination, diagnosis and treatment of the disease.

“Well-being and welfare of a home depends on women and your health is very important so take care of yourself as examining yourself is very simple and takes only five minutes in a month,” Begum Alvi urged the women.

She said that awareness campaign regarding breast cancer was being carried out from years and a number of philanthropists, educational institutions, civil society activists and a large number of people from different walks of life had joined it.

Pink was colour of the breast cancer awareness campaign that derives attention of the viewers and the message in this way reached to persons who earlier were unaware about the disease, she noted.

Lauding media’s role in the campaign, she said that media was successfully conveying the message all around the country and more and more women were examining themselves for prevention from the fatal disease.

Over the years, facilities of diagnosis and treatment of breast cancer increased as well and right now there were over 13 facilities offering Mammography at discounted rates only in Karachi, she informed adding that such facilities were also available in Islamabad, Punjab, Khaiber Pakhtunkhuwa and Balochistan. Everyone should pledge to promote and spread the message of the campaign in their social circles to sensitize every woman about importance of the early detection that could save the life, she urged the college students.

She also expressed gladness on organization of such an event at St. Joseph College for Women and said that it was a prestigious educational institute that played a major role in career building of thousands of students in 75 years.

Earlier Principal of the college Sister Julie Pacheco in her welcome address commended Begum Samina Arif Alvi for her philanthropic services in various sectors including health and education.

Sister Angelina Francis and Sister Julie Pacheco at the occasion also presented souvenir of the college to Begum Samina Arif Alvi while students played a welcome song specially composed for the occasion. 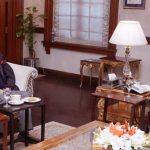