Pakistan trying to restore its relations with US: PM 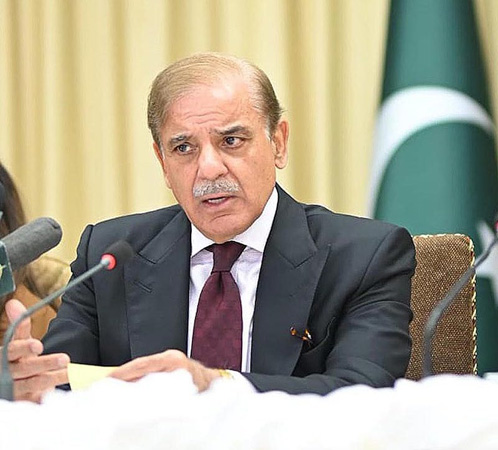 Prime Minister Shehbaz Sharif on Friday said that the Pakistani government is trying to restore its relations with the United States as he questioned his predecessor’s move to damage relations with Washington.

PM Shehbaz’s comments came while addressing the passing out parade ceremony of the 48th Specialised Training Programme of the Police Service of Pakistan at the National Police Academy.

At the start of his speech, the premier appreciated the role played by the police in ending terrorism, saying that their sacrifices will not go in vain. “The daughters of this nation are moving forward in every field and playing an important part in Pakistan’s development,” he stated.

PM Shehbaz said that Pakistan has sons and daughters who fight for the nation by risking their lives. He said that they should be trained with modern technology. He called the Counter-Terrorism Department and Punjab Science Agency as role model departments, adding they needed to be replicated in other parts of the country.

The prime minister congratulated the cadets who achieved awards in their professional field and also expressed satisfaction over the contribution of the women police force towards national development.

He urged the cadets to demonstrate dedication, professionalism and commitment in their field. The premier said the government despite financial constraints would provide funds to Islamabad police to enhance its professional capacity. PM Shehbaz said that Saudi Crown Prince Mohammed bin Salman bin Abdulaziz Al-Saud will visit Pakistan for a $12 billion state-of-the-art deep conversion refinery project along with a petrochemical complex in Pakistan. He lamented that this plan was first offered in 2019, however, no progress could be made on it.

The PM also said that the previous government did not initiate work on projects offered by Saudi Development Fund. He said all procedures for those delayed projects were completed within two days. During the ceremony, the prime minister shared a story about the delegation of the Saudi Development Fund which came to Pakistan a few days ago. He said that the delegation expressed grievances over delays in projects by the previous government.

“This is not how nations are built,” commented the PM. He termed the incident embarrassing and said that he apologised for it to the Saudi crown prince during his recent visit to the kingdom. “If the hospital and other projects were built, it would have benefited our Pakistanis,” he said, sharing that the crown prince said that Pakistanis are their brothers and that he is ready to do everything for Pakistanis. The PM also distributed shields and medals among the officers who secured distinction during the course.