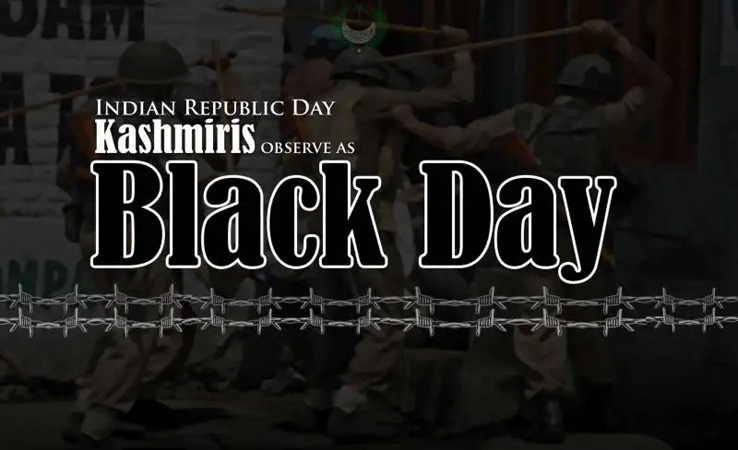 Kashmiris on both sides of the Line of Control and the world over will observe the 27th October, today, as Black Day to convey to the world that India has occupied their motherland illegally and against their aspirations.

The day will be marked by a complete shutdown and civil curfew by the people in Indian illegally occupied Jammu and Kashmir. Protest marches, rallies and seminars will be held in Azad Jammu and Kashmir, Pakistan and all over the world to condemn the invasion of the territory by Indian Army on 27th October, 1947 as well as revocation of special status of occupied Kashmir by the Narendra Modi-led fascist Indian government on August 5, 2019. Call for the observance of the shutdown and Black Day has been given by the All Parties Hurriyat Conference.

The APHC in a statement in Srinagar asked the Kashmiris to demonstrate to the world, tomorrow, that they would not rest till Jammu and Kashmir was liberated from Indian slavery. It urged the global community to give up its criminal silence on the Indian brutalities in IIOJK and take practical steps to force New Delhi to give the Kashmiris their right to self-determination as per the UN Security Council resolutions.

Posters appeared in Srinagar and other parts of the territory, urging people to observe shutdown in IIOJK, tomorrow, against the illegal occupation of their motherland by India.

It was on 27th October in 1947 when Indian troops in total violation of the spirit of the Partition Plan of the Subcontinent had militarily invaded Jammu and Kashmir and illegally occupied it against the will of the Kashmiri people.