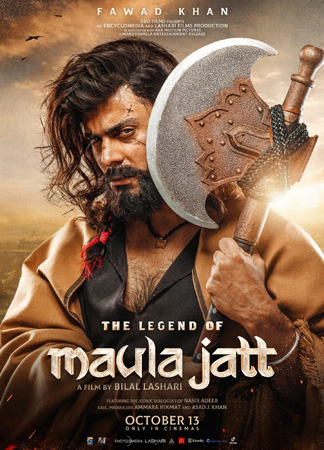 As per the statistics shared, the film ranked number one in the United Arab Emirates (UAE), sixth in Canadian cinemas, eight places in Australia, and ninth position at the United Kingdom (U.K.).

As per the breakup of the film box office report, TLOMJ earned $526,902 from Pakistan, $515,000 from Gulf, $354,465 from the UK, $289,739 from the USA, $235,172 from Candida, $160,390 from Australia while #250,000 from the rest of the world. The phenomenal response to the film has led to full house screenings across the world and queues outside cinemas, with exhibitors continuously scheduling additional screenings to meet consumers’ demands. Such has been the adulation for the film that standing ovations have been recorded at cinemas globally. The number of screens for the movie are increasing every day.

Producer Ammara Hikmat said, “The Legend Of Maula Jatt has been our labour of love for a number of years. The pandemic came and returned but we knew we had to hold out for a theatrical release, as the film is undoubtedly a big screen experience, as has been proved by the sheers numbers of cinemagoers who have turned out at the cinemas and the full house screenings, with exhibitors adding extra shows to the weekend programmes. We’re so delighted that our film has broken previous records and set a new benchmark for Pakistan-made cinema, loved and lauded not only domestically but by audiences and critics globally.”