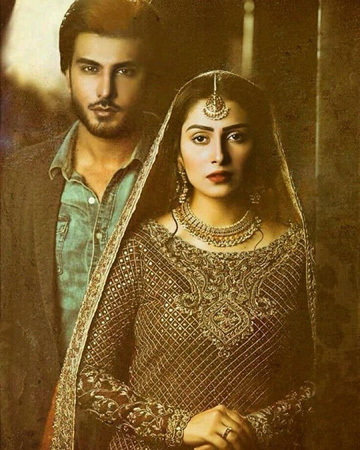 Actor Imran Abbas turned 40 yesterday and amidst all the birthday happiness and love he received from his acting fraternity, he gave his fans a treat with a hint about his upcoming project–and that too with Ayeza Khan! While we don’t know if they’ll pair as a couple again on screen, the good news, for now, is that the Koi Chand Rakh duo is returning on screens in February.

On Saturday, Ayeza took to her Instagram stories to wish her fellow actor and friend a happy birthday. Imran reposted the picture and expressed how fond he is Paas Tum “Ayeza! The co-star and friend I would love to work [with] again and again and again,” he wrote.

To which, Ayeza replied with something that surprised many of us.”Yes, February isn’t far away.” Now whether the shoot is in February or if this is related to a tv serial even is unknown, but we at least know the co-stars are looking forward to the work reunion as much as we do.

Ayeza khan and Imran Khan has together appeared in many block buster dramas including Koi Chand rakh, Dharkan nad Mohabbt Tumse Nafrat hai. People love their both chemistry and they love to see Imran and Ayeza Khan again and again in dramas. Apart from it Ayeza Khan is the most followed celebrity on Instagram.

While Ayeza Khan reveal in one of her interview that Imran Abbas made her Instagram id. She said that she doesn’t know about social media and Imran Introduces her account on Instagram. Now she has cross more than 11 million followers on Instagram.