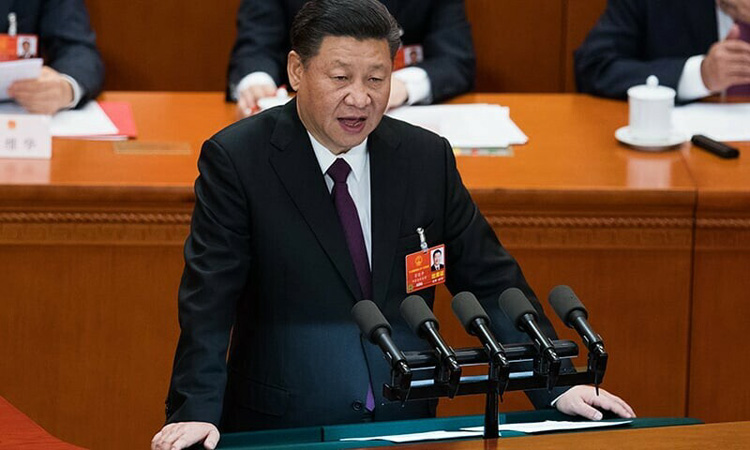 President Xi Jinping hailed China’s rise as a global power and demanded unity around his leadership on Sunday, launching a Communist Party Congress that is set to rubber stamp his bid to rule for a historic third term.

In an opening address to 2,300 delegates gathered at the Great Hall of the People, Xi promoted and defended a range of signature policies – including zero-Covid and his anti-corruption drive that has taken down rivals in the party. “Unity is strength, and victory requires unity,” Xi said after walking onstage to a thunderous reception from the attendees who will vote during the week-long Congress on the party leadership for the next five years. The president – whose 10-year rule has seen the country become a global superpower – said “China’s international influence, appeal and power to shape the world has significantly increased”.

Xi celebrated the party’s continued efforts to eradicate Covid – which are placing heavy curbs on people’s lives and is hammering the nation’s economy – as a major achievement. He insisted the approach had protected people’s safety and health to the highest degree. He also highlighted as a success his graft crackdown, which has seen thousands of people jailed and critics have said has been used to crush dissent and opposition to his rule.

Xi said the anti-corruption campaign had eliminated “serious latent dangers” within the Communist Party, the military and the state. “The fight against corruption has won an overwhelming victory and has been comprehensively consolidated,” he said. In a speech that mostly focused on domestic issues, Xi also told the delegates that China would “actively participate in global governance on climate change”. Xi also reiterated that China opposed a “Cold War mentality” in international diplomacy, but made no mention of frayed relations with the United States.

Xi also did not reference the Ukraine war. There were no policy announcements in the address, which was largely a review of the current state of play, and analysts said Xi wanted to project stability. “This is a very turbulent time with the Covid crisis, economic downturn and tense international situation, especially with the US,” said Alfred L. Chan, a Xi biographer and professor based in Canada. “Caution, rather than dramatic change, is more prudent.” Should everything go to plan for Xi, the 69-year-old will be endorsed as the party’s general secretary after the week-long meeting ends, cementing his position as China’s most powerful leader since Mao Zedong. Xi Jinping said China had seen a historic rise in its economic strength in the past decade with its GDP growth to 114 trillion yuan (about $16 trillion) from 54 trillion yuan. He said the past decade marked three major events of great immediate importance and profound historical significance for the cause of the Party and the people.

“We embraced the centenary of the CPC, we ushered in a new era of socialism with Chinese characteristics, and we eradicated absolute poverty and finished building a moderately prosperous society in all respects, thus completing the First Centenary Goal,” he said. The CPC aims to basically realize the socialist modernization from 2020 through 2035 and build China into a great modern socialist country that is prosperous, strong, democratic, culturally advanced, and harmonious, he added. On people’s well-being, he said China will improve the system of the income distribution. “We will ensure more pay for more work and encourage people to achieve prosperity through hard work,” Xi said. “We will promote equality of opportunity, increase the incomes of low-income earners and expand the size of the middle-income group.” On national reunification, Xi said that the CPC would implement its overall policy for resolving the Taiwan dispute. Xi and the party’s other top brass are likely to be unveiled on October 23, the day after the Congress closes.

If picked as party leader for another five-year term as expected, he is almost certain to be elected president at the annual meeting of China’s National People’s Congress in March. In the highly choreographed, mostly closed-door conclave this week, the delegates will pick members of the party’s roughly 200-member Central Committee, which in turn selects the 25-person Politburo and its all-powerful Standing Committee – the country’s highest leadership body. A heavy police presence was in place around Beijing early Sunday as authorities prepared for the Congress. Participants navigated a string of security checks before entering the hall, where a giant hammer-and-sickle emblem hung over the stage on which top leaders are due to be seated. “Long live the great, glorious and correct Chinese Communist Party,” blared one of the bright red banners adorning the hall.