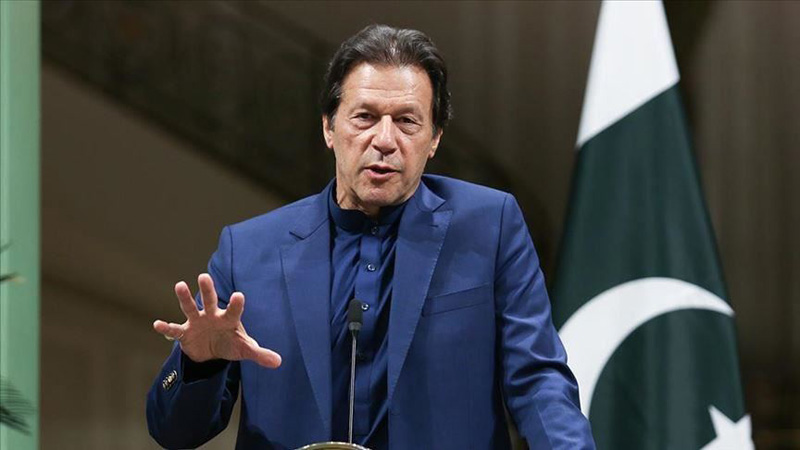 PTI chairman Imran Khan has said he has completed planning but will not announce the date of the upcoming long march. “The long march will be held within October,” the PTI chief said while speaking during an interview with a private TV channel. Asked if he is waiting for a decision by the government, he said attempts were being made to remove him from the way and then hold elections to pave the way for Nawaz Sharif. “If Nawaz Sharif returns, it will benefit us,” he said, adding that the PML-N supremo’s cases are likely to end soon.

Imran Khan said he wants the government to announce fresh elections and only then the long march can be stopped. He said elections should be held soon to ensure political stability or the country will be even dire straits when the government leaves. Regarding the appointment of next army chief, he said Nawaz Sharif and Zardari wanted their favourite judges, officers, and FIA heads. “I have no favourites as I believe in merit. The army chief should come on merit. Judges should be appointed on merit,” he said, adding that neither Nawaz Sharif nor Zardari are competent enough to choose the next army chief. He said the government will not be able to stop the long march. He said the government held three marches against them but ruined the economy in last six months.

Regarding US President’s statement that Pakistan is one of the most dangerous countries and its nuclear weapons lacks cohesion, the former prime minister said failed attempts were made by the current government to ‘reset’ ties with the United States.

He said India is a strategic partner of the United States and foreign policy is made in their interests. Similarly, he said Pakistan should make policies in its own interests but the government claims that he isolated the nation. “There is still time to save the nation. The imported government attempted to appease the US. They don’t realize India is their strategic partner. The US will deal with Pakistan as per their foreign policy,” he said.

He said there has been a concerted campaign since decades against Pakistan’s nuclear weapons. He said Pakistan is on verge of default and they will pay a heavy price on national security. “We have stood up many times against the United States. I have once tweeted against Donald Trump’s remarks regarding Pakistan which is still available,” adding that he was elected to represent the interests of the nation.

He said a comparison should be made on the conditions which PTI government left and current state of affairs. “It will not have any impact if we appease the United States. The Western mindset does not appreciate this appeasement,” he added.

In response to a question that Finance Minister Ishaq Dar has failed to hold negotiations with the IMF, he said the country gets poorer when he is in charge while his assets increase manifold.

He said the PML-N government neither increased remittances or exports while price of dollar has been reduced superficially. “He has always fudged the numbers. Have the prices of electricity reduced by 45 percent as claimed?” he asked.

He said the Sharif’s family owns the most expensive apartments in London but has not been answerable for three decades. He said Maryam has been released and now Zardari and Nawaz Sharif will also be acquitted in all cases after the changes in NAB laws.

When asked whether he had powers during his reign, Imran Khan said he has excellent relations with state institutions but the NAB was not in his control. “There is no rule of law. The cases were ripe against them but they could not be established in court. This is where I was helpless.”

Regarding the incidents of custodial torture, he said it is shameful that 75-year-old Azam Swati was picked overnight, stripped and tortured. He said those responsible should be accountable as it had defamed the nation and the armed forces.

He said the incident of Shahbaz Gill and Senator Azam Swati was a severe violation of human rights. He said the international media has highlighted the issue and it sent a negative image abroad. “Those who are silent over the matter are complacent,” he said, adding such incidents were not seen even in worst dictatorships. Regarding the bypolls on Sunday, Imran Khan said the government cannot win the election without rigging. “If they do, the star will be CEC Sultan Raja,” he quipped, adding that people have immense awareness and he will surely win the elections.