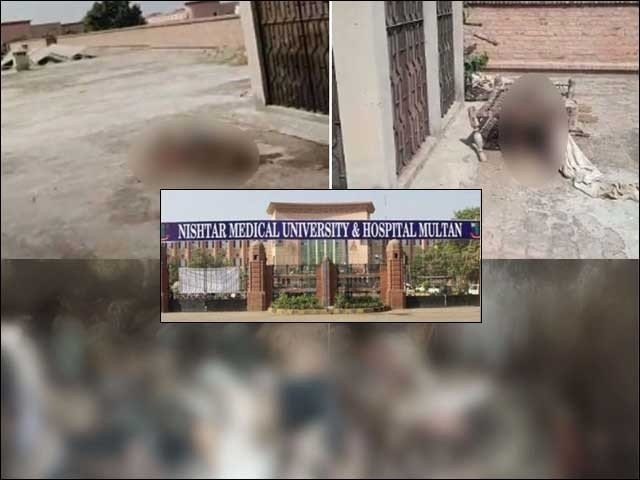 A senior official from Multan’s Nishtar Hospital accused police and rescue workers of being responsible for the rotten bodies on the medical facility’s rooftop.

Numerous unidentified and desecrated bodies were found on the roof of Nishtar Hospital’s mortuary in Multan on Friday. The video circulating on social media showed several bodies dumped on the roof in bad conditions, resulting in rumours that the bodies were kept on the roof to be used as fodder for eagles and vultures.

The Punjab government formed a six-member committee to investigate the horrifying incident.

However, Nishtar Medical University’s (NMU) Head of the Anatomy Department Dr Mariam Ashraf said in a private channel program that the rescue officials and police were to blame for the piling up of bodies in the morgue and on its roof.

N said that the medical facility could not refuse to accept the bodies as it was bound to take them in as safekeeping. “Police and rescue officials ask us to keep it in the hospital.”

“The police and rescue officials do not take them back on time. We have written documents in which we have asked them to take the bodies. Since there is a lag, such things happen,” the official said.

“Edhi Foundation has not been picking up bodies from our hospital since they do not have burial space in their graveyard,” she said.

“The only reason for the bodies being kept on the roof is that their influx is huge and they aren’t returning back to the police stations in the numbers that they should,” she claimed.

Furthermore, police and the Edhi foundation rejected the allegations.

“We did not refuse Nishtar Hospital to bury the dead bodies; in fact, we contacted them today for the burial,” Edhi claimed.

He further shared that the organization has buried 155 dead bodies in the past 11 months.