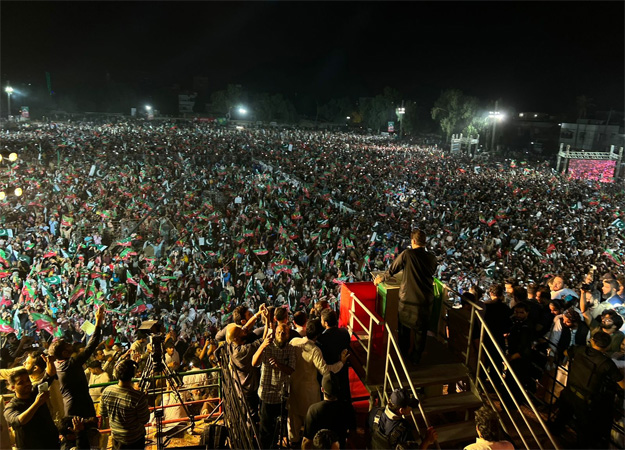 Pakistan Tehreek-e-Insaf (PTI) Chairman Imran Khan on Friday deemed the upcoming by-elections a ‘referendum’ to decide fate of the country.

The by-polls on two National Assembly constituencies of Karachi – NA-237 (Malir-II) and NA-239 (Korangi-I) – will take place tomorrow. “In the by-elections, the destiny of Pakistan will be decided as the country has entered into the decisive phase,” the PTI chief said while addressing a rally in Karachi.

In a veiled dig at Sindh’s ruling party PPP, Imran Khan said that the reign of “dacoits” in the province should come to an end. He said that in the next general elections, his party would form governments in Sindh and the Centre. “Sindh’s resources are stolen, and they are siphoned out of the country,” the PTI chairman said. Khan urged Karachi’s youth to come forward and partake in politics as political movements in the early days would begin from the metropolis.

“Had there not been violence in Karachi, it would have progressed more than Dubai,” Khan said as he vowed that now, things would change for the port city as “no power” could stop his party from getting its mayor elected in the upcoming local body elections. “After the local body elections, we will also emerge successful in the general elections,” he said. The PTI chairman also said that the incumbent government, which came into power through a “foreign conspiracy”, would not remain in office for long. “My nation has stood up for its future.” Imran Khan lambasted the incumbent government, saying that the country will have no future if the robbers succeed this time. Imran Khan vowed to rid the residents of the province of oppressors if elected in the next elections. “InshaAllah, we will establish not only federal government but also Sindh government and eliminate Zardari mafia raj in Sindh,” he proclaimed.

He further said that the ‘Zardari mafia’ was looting the wealth of Karachi and investing it abroad, especially Dubai. That is why Dubai is flourishing, he claimed. “Zardari mafia is a bad luck for people of Sindh,” he said. He said that no one can dare to stop PTI revolution, we must take stand against thieves; as people are waiting for change. Later, he also took oath from the participants of the meeting for joining the PTI freedom march. Imran asked supporters to pronounce their verdict in the by-elections and reject the “imported government”. “I am going to launch the biggest march in country’s history and a sea of people will come out with us and give a verdict in our favour,” he said.

Terming Karachi the “finance engine of Pakistan”, Imran said the city ran the country on the economic front, adding its people were sensible and politically aware. He also subjected his former ally MQM-P to criticism, pointedly asking them: “Are you happy with Zardari? Has he resolved all the issues of Karachi?” The ex-PM said that his government initiated the Karachi Circular Railway project along with the Green Line Bus service. “We also started the K4 project that was on the back burner for 14 years.”

Imran said his next stopover would be interior Sindh where, according to him, he would lead a drive to “free people from the clutches of Zardari”. The PTI chief called upon rally participants to “take responsibility” in his “fight against corruption”, saying “it is not my job alone to battle against corruption in the country.”

Earlier, he also accused Prime Minister Shehbaz Sharif and his family for “plundering the nation’s wealth and stashing it in properties abroad”.

Addressing the lawyers, the PTI chief expressed his gratitude the Karachi Bar for inviting him. While stating that this is the most important time in the country s history, the former prime minister [Imran] said that if NRO-2 of the big looters succeeds, the country will have no future.

The former prime minister claimed that he was waging a jihad against the looters and wanted the lawyers’ community to support him in this regard. Imran Khan took the government with open arms and said that robbers leave the country after looting money and return to the country with NRO.