* Hirst, estimated to be the UK's richest living artist, opened the exhibition on September 23 at his private gallery, the Newport Street Gallery in London 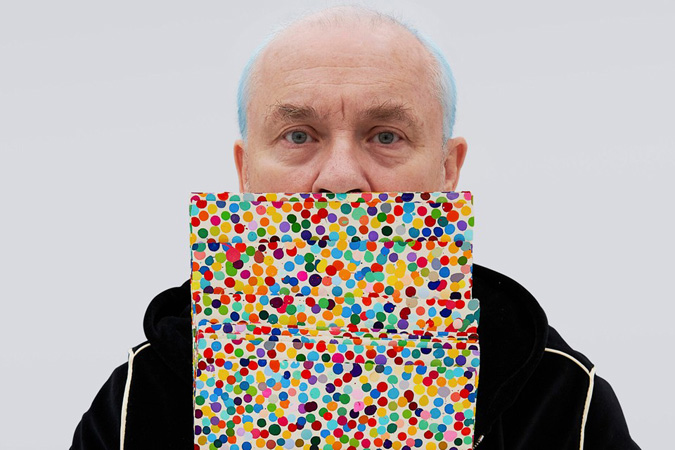 Whenever valuable contemporary artworks are burned, there’s sure to be media attention.

It’s a fact that was likely considered by Damien Hirst, whose new exhibition, “The Currency,” involves burning a series of his works.

Hirst, estimated to be the UK’s richest living artist, opened the exhibition on September 23 at his private gallery, the Newport Street Gallery in London. The 57-year-old artist is no stranger to pulling publicity stunts. Critics either love or hate him – either way, his success in the art world is undeniable.

Following in the footsteps of another star artist, Jeff Koons, Hirst is now working with NFTs, so-called non-fungible tokens, which are digital certificates that cannot be manipulated and are therefore virtual originals, secured in a blockchain. It’s Hirst’s first NFT project, and it’s been going on for a year now.

In total, 5,149 buyers chose to exchange their NFT for a piece of physical art, while 4,851 people chose the digital token.

The artworks whose owners opted for the NFTs are to be burned. Hirst himself will set alight a pile of the works on October 11, a day before the opening of London’s Frieze Art Fair, one of the world’s biggest contemporary art fairs.

Hirst described his project to “The Art Newspaper” as his “most exciting by far,” touching on the “idea of art as a currency and a store of wealth.” It’s no accident that governments decorate coins and notes with art: “They do it so that we trust in money. Without art, it’s hard for us humans to believe in anything.”

Curator and art critic Kolja Reichert has been hosting a number of discussions at the Bundeskunsthalle in Bonn, including one on what possibilities blockchain technology enables for expanded participation in the art world. Even with his NFT project, “Damien Hirst gets stuck in the ownership criteria of analog art,” he told DW.

For Reichert, NFTs are much more about circulation as opposed to how artworks have traditionally been collected and owned. He believes there is a lot of potential in blockchain technology that artists could also use to comment on social issues.

German conceptual and media artist Hito Steyerl has, for example, used art to comment on NFTs and what she feels is their gender bias. As a satirical commentary on the NFT hype in the art market, she unceremoniously made major German cultural institutions – the Bundeskunsthalle and the Humboldt-Forum – into NFTs and declared herself their owner. In their current function, NFTs in the art market are like the equivalent of toxic masculinity, Steyerl criticized at a 2021 event.

Reichert of the Bundeskunsthalle feels that NFTs should explore participation and how one thinks about the concept of art ownership. This year, the curator showed an NFT project by the art collective Cercle d’Art des Travailleurs de Plantation Congolaise (CAPTA), founded by workers in Lusanga, Congo, in collaboration with Dutch artist Renzo Martens.

The group minted 300 NFTs of the sculpture “Balot.” The sculpture was made in 1931 by the Pende, an ethnic group in the Democratic Republic of Congo, with the purpose of banishing the ghost of Belgian colonial official Maximilien Balot who had committed atrocities and was eventually beheaded.

The original sculpture is now in a museum in Virginia, while the NFTs that CAPTA and Renzo Martens made were sold at Art Basel in 2022. The money generated from the sales went directly to the former palm oil plantation in Lusanga. “This action creates measurable effects, namely the ability to repurchase land,” Reichert elaborates.

The land is not only bought, but also replanted and cultivated, and creates local income. On the other hand, the action focuses on how the sculpture, which to this day the Pende consider a power figure, came to be in a Virginia museum via a European art dealer.

Alongside the buyback of the land and the development of sustainable agriculture, the collective uses the income to bring back culture to Lusanga. Maybe one day, the “Balot” will come back too.

These are actually the really interesting questions regarding ownership, Reichert argues. “What does the museum in Virginia actually own? Is the authority of the museum bigger or that of the people living in the region today, who want to restore it to its original function?” For the curator, this is more interesting than revisiting the idea of art as a currency, as in Hirst’s project.