* 'Sky caption this post!' she wrote with aesthetic clicks, which see her pose in the scenic view of nature 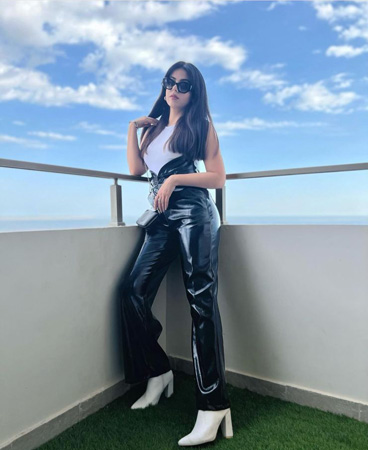 Showbiz actor Yashma Gill slayed in her stylish picture gallery which went viral on social media platforms. The ‘Azmaish’ actor took to her handle on the photo and video sharing site on Tuesday and shared new pictures of herself on the wall. Gill asked her million of Instagram followers to suggest a suitable caption for the four-picture gallery.

“Sky caption this post!!” she wrote with aesthetic clicks, which see her pose in the scenic view of nature. Gill is seen in black high-waisted leather pants and a white tank top. She styled the look with white shoes, glasses, and dainty bracelets.

Thousands of social users showered their love on the viral pictures of Yashma Gill with likes and lovely comments for the actor, in addition to caption suggestions.

“When sky was on fire”

With a million Instagram followers, the actor is one of the most followed Pakistani celebrities on social media. Her gram feed is filled with stylish pictures of the diva from her photoshoots as well as BTS snippets of her projects.