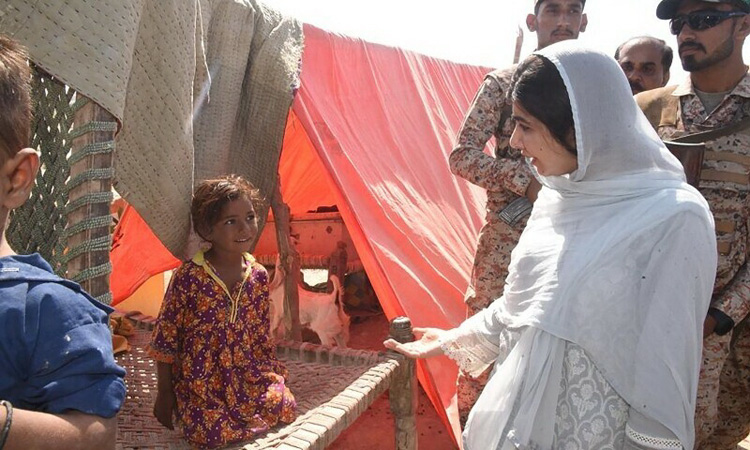 Nobel Laureate Malala Yousafzai on Wednesday visited the flood hit area of district Dadu and reviewed the devastation caused by the monsoon rains and the flash floods.

Accompanied by her father Ziauddun Yousafzai, Sindh Health Minister Dr Azra Pechuho, Education Minister Syed Sardar Ali Shah and singer Shehzad Roy, Malala Yousafzai inspected the Chhandan area of Juhi and lamented the devastation caused by the floods. The purpose of the Nobel laureate’s visit is to help victims in rehabilitation as floods had devastated hundreds of thousands families in Sindh and other parts of the country.

Malala visited the embankment of MNV drain and also met the flood hit families and the children living there in tents. She also inspected the tent settlement in Chandan Deh and met the flood victims. On arrival at the tent village, Malala was warmly received by women belonging to flood affected families. On this occasion, the Nobel laureate mingled with the affected families. In his briefing, Education Minister Sardar Shah informed that 12,000 schools were destroyed due to floods, which has affected the education of 2 million children. Sardar Shah said that many areas are still under water and after drainage if the flood water, the damaged schools will be identified.

Malala expressed her concern over destruction of educational institutions due to which education of children had been affected. She emhasised arrangements for schooling for the affected children. She sat down and talked to the flood affected women during her visit to the camp and listened to their problems. She encouraged the flood affected women saying that they are brave as they were coping with these difficult times. Deputy Commissioner Sayed Murtaza Ali Shah also briefed the Nobel laureate about the destruction caused by the floods in the district.

On this occasion, DC and SSP Dadu also presented a gift of Ajrak and Shawl to Malala on behalf of Sindh chief minister. Later, Malala returned back to Karachi after observing destruction caused by the floods in Sindh. Earlier, Sindh Chief Minister Sayed Murad Ali Shah in a statement praised the visit of Malala and said due to her visit to the flood-hit areas of Sindh, a strong voice about human tragedy will be spread all over the world. The Nobel laureate arrived in her native country a day earlier to meet flood victims.

Her visit — only the second since she was flown to Britain for a life-saving treatment following a terrorist attack — comes as thousands of people protested in her hometown, where the same militant group is once again on the rise.