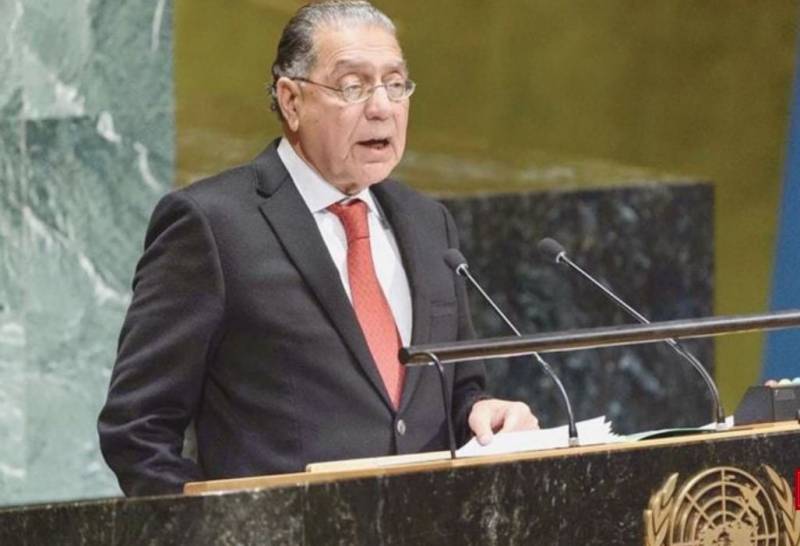 Pakistan drew the world community’s attention to the threat posed to peace and security in South Asia by India’s “ultranationalist and hegemonic” policies, that, among other objectives, seek to crush the legitimate Kashmiri quest for self-determination with an occupation army of 900,000 troops.

“Peace and security in South Asia is threatened by the ultranationalist and hegemonic policies of one State, turbo-charged by the extremist ideology of Hindutva,” Ambassador Munir Akram Tuesday told the UNGA’s First Committee, which deals with disarmament and international security matters.

As far Pakistan, he said that Islamabad desired, and was determined to pursue, peace, development and strategic stability based on sovereign equality and mutual respect.

Elaborating on the threat to regional peace, the Pakistani envoy said, the Indian government seeks to establish an exclusive Hindu State in India by oppressing and marginalizing its 200 million Muslims and other minorities, and threatening and intimate Pakistan with the deployment of the vast majority of its land, sea and air forces against it and the adoption of doctrines which envisage fighting a “limited war under the nuclear overhang” and resorting to “Cold Start” surprise attacks.

India, he said, is also building up its conventional and nuclear weapons capabilities, including by the acquisition of weapons – amounting last year to $73 billion – to threaten neighbours, impose its regional hegemony and promote its great power aspirations.

Ambassador Akram also referred to the proclaimed desire of the Hindutva leaders to occupy Azad Kashmir and other territories, and even to create “Akhand Bharat” – a concept that envisages Hindu rule over all of South Asia and beyond – are indications of the nature of the New Delhi government and the threat it poses to peace and security in South Asia.

“Lack of global accountability and the generous supply of advanced weapons and technologies have enabled India to continue its defiance of Security Council resolutions, and international law, norms and rules.”

One recent indicator of India’s “reckless” behavior, he added, was the launch of a supersonic nuclear-capable Indian missile into Pakistan’s territory on 9 March this year.

“This could have escalated into a wider conflict, but for Pakistan’s self-restraint. It is insufficient for India to dismiss this incident as an ‘accident’ and pin the responsibility on a few people,” the Pakistani envoy said, adding, “The joint inquiry called by Pakistan is appropriate and essential for strategic stability in South Asia and should be demanded by the relevant international organizations.”

In his remarks, Ambassador Akram said that peace and stability in South Asia can be achieved through:

The resumption of negotiations to resolve the outstanding disputes between Pakistan and India, especially the resolution of the Jammu and Kashmir dispute in accordance with UN Security Council resolutions and the wishes of the Kashmiri people.

Maintenance of a balance of conventional and strategic military capabilities and deployments, including reciprocal measures for nuclear, missile and military restraints between the two countries, with Pakistan’s proposal for a Strategic Restraint Regime in South Asia remaining on the table, and,

The simultaneous opening of trade and investment cooperation, including the implementation of connectivity projects linking South Asia with Central Asia, West Asia, China and beyond.

The Pakistani envoy hoped that India will help to create conducive conditions for such a broad-based dialogue to realize peace and stability in South Asia.