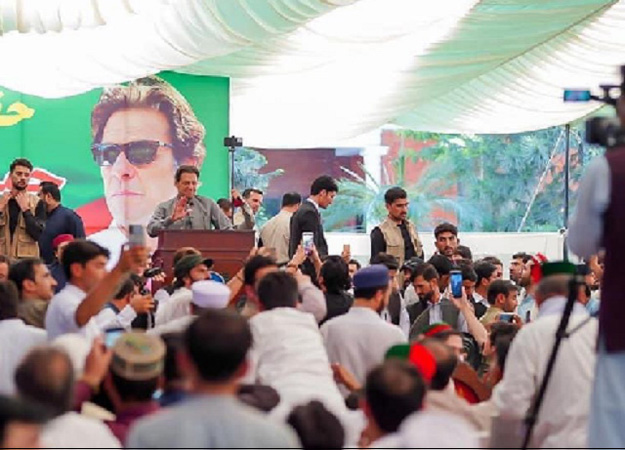 Former prime minister and PTI Chairman Imran Khan on Tuesday termed the closure of corruption cases a ‘joke’, adding that the incumbent rulers are making a mockery of the justice system by closing down their cases, a private TV channel reported.

“The government has appointed its henchman to the National Accountability Bureau (NAB) so that they get decisions of their choice in the corruption cases,” the former premier said while addressing party officials in Peshawar. “I do not have personal enmity with the Sharif and Zardari families. I am fighting for the future of the nation,” he said. “Today is the decisive time for the nation. It’s time to stand up for the real freedom of the country,” he added.

Imran said the “cabal of crooks” got exonerated in corruption through NRO promulgated by former military ruler Gen (r) Pervez Musharraf. “They [coalition government] came to power on the pretext of inflation but now they have created a storm of inflation. They are making false cases against me to clear their way,” he remarked.

The PTI chief also asked party workers and officials to remain prepared for the upcoming much-hyped long march to Islamabad to achieve ‘real freedom’, saying that he will not rest until sending the incumbent rulers packing.

The JCI is a USA-based leader for accrediting healthcare quality and patient safety in hospitals across the world.

“After a gruelling three-week survey in Aug/Sept 2022, our hospitals in Lahore & Peshawar as well as our diagnostic centres in Karachi & Lahore have all been awarded the JCI’s Gold Seal of Approval, the global gold standard for excellence in quality healthcare,” said the PTI chief who founded the charity hospital in 1991. “I want to thank the thousands of people who work at Shaukat Khanum for their hard work and dedication.”

The former premier also thanked “millions of donors and supporters who make it possible for us to continue providing world-class cancer treatment completely free of charge to over 75% of our patients”. “I have always said there is nothing we can’t achieve as a nation, if we put our minds to it,” he added.

Separately, reports said Imran Khan will pay a day-long visit to Lahore today. During his visit, the prime minister would also hold meetings with PTI Punjab wings to review preparations regarding the forthcoming ‘Haqeeqi Azadi’ march towards Islamabad. The PTI chief will also meet cabinet members and party leaders.