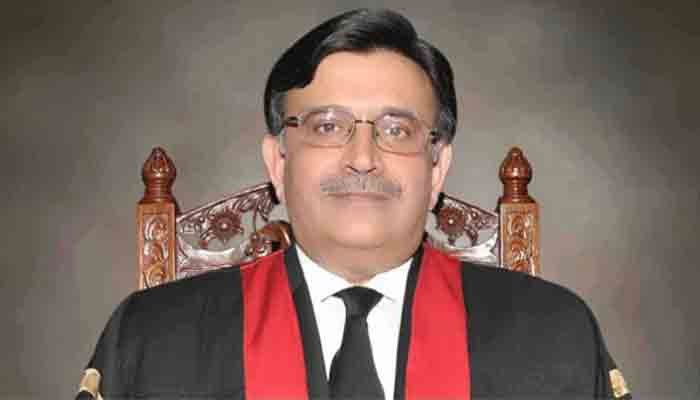 The lifelong disqualification of a public office holder under Article 62-1-F of the constitution was called a “draconian law” by Chief Justice of Pakistan (CJP) Justice Umar Ata Bandial on Tuesday.

During the hearing of an appeal filed by Pakistan Tehreek-i-Insaf (PTI) leader Faisal Vawda against his lifelong disqualification from holding any public office, the CJP said the Supreme Court (SC) would hear the case carefully. “There will be a detailed hearing of the case,” he said.

A three-member bench of the apex court, headed by CJP Bandial, heard the appeal.

PTI’s Faisal Vawda filed a petition in the top court in February under Article 185(3) of the Constitution for leave to appeal against the order of the Election Commission of Pakistan (ECP) dated February 9 and the February 16 Islamabad High Court judgment.

Speaking on the occasion, Vawda’s lawyer Wasim Sajjad said that his client had won his seat in the general elections of 2018. “Two years later, a petition was filed in a high court, seeking his disqualification for misstating the facts,” he said.

The CJP said that the Election Commission of Pakistan (ECP) had the power to investigate if it came to its notice that a legislator had not reported the facts correctly. “And even if the SC declares the ECP’s order null and void, the point is that facts of the case will remain there,” Justice Bandial said, adding that in Vawda’s case, the ECP gave the ruling after proper scrutiny.

Farooq H. Naek said that the Islamabad High Court (IHC), in its verdict, had clearly stated that the PTI leader had admitted that he was a dual nationality holder.

The CJP said now the only question was to ascertain whether the ECP could have ordered lifelong ineligibility of Vawda in the case.

The hearing was adjourned till October 6.

It is important to note that the apex court in April 2018 declared that the disqualification under 62(1)(f) would be for life.

Former prime minister Nawaz Sharif and Jahangir Tarin both are disqualified for life under the said article.

he is a citizen of Pakistan;

he is, in the case of the National Assembly, not less than twenty-five years of age and is enrolled as a voter in any electoral roll in-

any part of Pakistan, for election to a general seat or a seat reserved for non-Muslims; and

any area in a Province from which she seeks membership for election to a seat reserved for women.

he is, in the case of Senate, not less than thirty years of age and is enrolled as a voter in any area in a Province or, as the case may be, the Federal Capital or the Federally Administered Tribal Areas, from where he seeks membership;

he is of good character and is not commonly known as one who violates Islamic Injunctions;

he has adequate knowledge of Islamic teachings and practises obligatory duties prescribed by Islam as well as abstains from major sins ;

he is sagacious, righteous and non-profligate, honest and ameen, there being no declaration to the contrary by a court of law;

he has not, after the establishment of Pakistan, worked against the integrity of the country or opposed the ideology of Pakistan.

The disqualifications specified in paragraphs (d) and (e) shall not apply to a person who is a non-Muslim, but such a person shall have good moral reputation.”