Priyanka Chopra on US voting rights: ‘One day, my daughter will’ 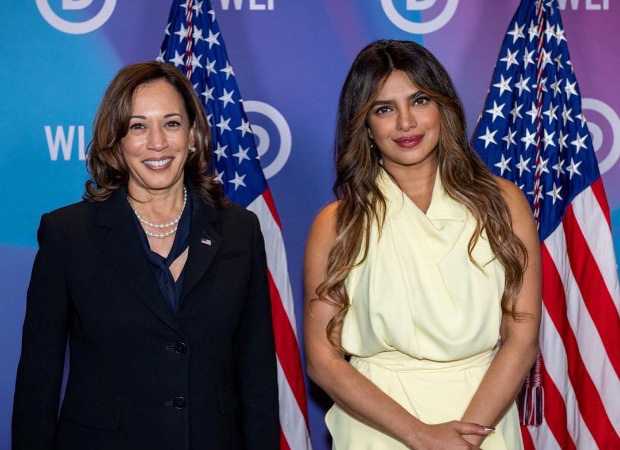 Priyanka Chopra, on Sunday, shared a post on her Instagram handle from her recent discussion with US Vice President Kamala Harris at the Democratic National Committee’s Women’s Leadership Forum conference. The actress has shared pictures and videos from the event and wrote a lengthy note in which she spoke about voting rights. She said, “While I don’t vote in this country – my husband can and one day, my daughter will.” In the note, she also spoke about how at the beginning, the world undermined the power of women, but now women are in a place where they can come together and work collectively to “right the wrongs”. In her note, she also thanked WLF (World Leader Forum) and Secretary Hillary Clinton, a founding member of this organisation, for inviting and including her in these important conversations.

She began her note with Ruth Bader Ginsburg’s quote, “Women belong in all places where decisions are being made. It shouldn’t be that women are the exception.” She added, “Since the very beginning, the world has undermined the power of women. We’ve been shunned and silenced, but thanks to the scarifies and tenacity of so many selfless women, we are in a place today where we can come together and work collectively to right the wrongs. This was a key take away from the conversation I had the honour to moderate with @vp, Kamala Harris at the Women’s Leadership Forum conference in Washington DC last night.”

She continued, “Over the last two years, humanity has experienced some of the biggest challenges that we will see in our lifetime. We are faced with an urgent need for stability and progress, and for America that starts at the polls on November 8th. Everyone has a role to play towards that… to be part of the civic process and to exercise the right to vote, especially women because we need to be actively involved in ensuring our rights are being taken care of.”

Speaking about voting rights, Priyanka wrote, “While I don’t vote in this country – my husband can and one day, my daughter will. My conversation with VP Harris centred around the most pressing issues, that, in order to be addressed, needs to have a clear vision and plan.” She concluded the note by writing, “Thank you to the WLF and Secretary Hillary Clinton, a founding force in establishing this organization, and for including me in these important conversations, among an incredible collection of accomplished women.”