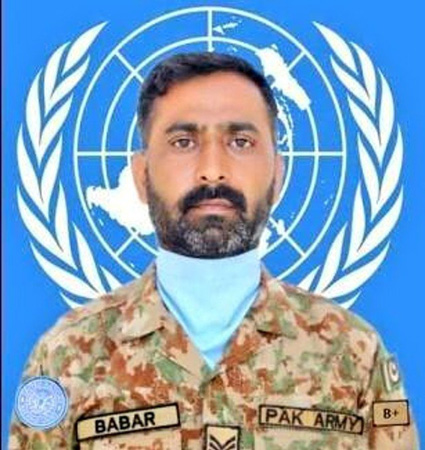 A Pakistani peacekeeper, Havaldar Babar Siddique, embraced martyrdom on Friday in the line of duty on the UN Peace Keeping Mission in the Democratic Republic of Congo, the military said on Saturday.

According to Inter-Services Public Relations (ISPR), six armed assailants from Bunyamalange Armed Group approached Permanent Operation Base (POB) Minibwe in Congo in disguise to surrender their weapons as part of a UN initiative.

It said that 35-year-old Havaldar Babar Siddique was performing duties of Guard Commander at the entry point for registering proclaimed surrenders. The leading assailant started discriminate firing on check post and resultantly Havaldar Babar received a gunshot on his head, it added.

The soldier was a resident of Shakargarh and is survived by his wife and two children including a son and a daughter. The statement said that Pakistan Army troops responded immediately. “Havaldar Babar was evacuated to the nearest Pakistan Army medical aid post but he could not survive,” the ISPR said.

The military statement said that Pakistan has always played a pivotal role as a responsible member of the international community to help realise ideals of global peace and security through active support in various UN peacekeeping missions.

“Our peacekeepers have always distinguished themselves in executing challenging peacekeeping tasks in conflict-torn areas through devotion and, if necessary, rendering supreme sacrifices,” the statement added.

So far, 171 Pakistani peacekeepers have laid down their lives during various UN missions for international peace and security, it further said.