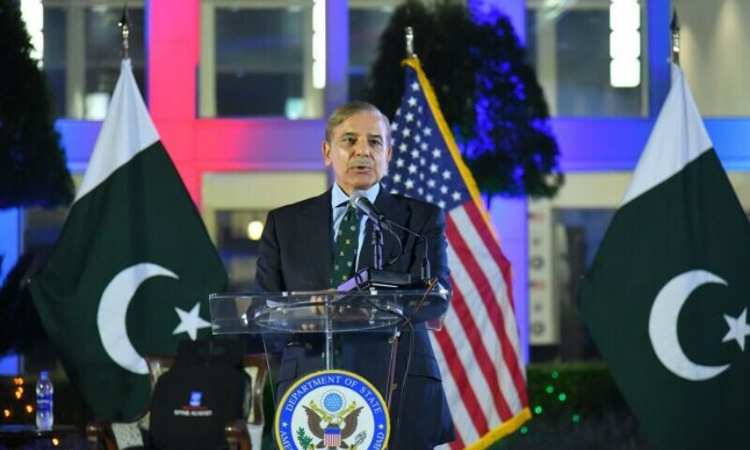 With questions raised recently over Pakistan’s ties with the US in the context of its ties with India, Prime Minister Shehbaz Sharif on Thursday said that the Pakistan-America relationship should not be judged in the China and Afghanistan context. Shehbaz reiterated the importance Pakistan gives to its ties with Washington, adding that America was amongst the first countries to accept the new state of Pakistan. “Let bygones be bygones,” the premier said at a diplomatic reception held at the US embassy in Islamabad to commemorate the 75 years of relations between Pakistan and the US. “As I said, there will be a lot what your [US] side will want to say […] but as long as we renew this friendship with sincere and serious dialogue, I can assure you that nothing will go wrong.” Shehbaz said that during the long journey of 75 years, Pakistan-US relations “touched their apex of glory but there were also several dips”. “We know the reasons but this is not the right time to recall them. I want to say this very sincerely today that we want to build and reset these relations back to normal on the basis of trust, respect, and mutual understanding,” he said. Shehbaz stressed that it was time for the two countries to move forward and find ways to warm up the relationship to levels seen in the past. Talking about support and aid from the US over the years, the prime minister expressed regret that aid worth $32 billion contributed by the country in the past was not spent “in the right direction”.

“Had we used this aid in a well-planned and properly supervised [manner] we would have broken our begging bowl. But then there is no point in crying over broken bowls.” But now, Shehbaz underlined that Pakistan wanted to stand on its own feet now. The prime minister also recalled that during his visit to New York, he met US President Joe Biden and Secretary of State Antony Blinken who assured him of support for the flood-affected people. He went on to say that the floods in Pakistan this year were a “disaster beyond means”. The yawning gap between demand and supply, Shehbaz highlighted, was widening by the hour and this was just the first phase. “The final phase of reconstruction and rehabilitation is yet to come. But that costs money and therefore, I again request you […] that now we need the international community to stand by us and support us,” he said. He clarified that the government was not asking for money but relief, funds for rebuilding the infrastructure, jobs, livelihoods, commerce, trade, and exports.