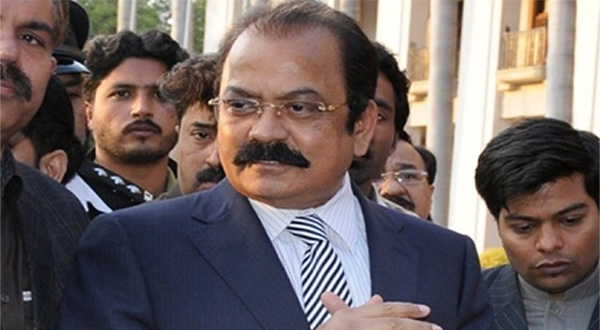 ISLAMABAD: Interior Minister Rana Sanaullah on Wednesday said that the government will conduct a forensic audit of Prime Minister Shehbaz Sharif and PTI Chairman Imran Khan’s leaked audios.  Earlier today, a sound bite of the former prime minister allegedly telling his then-principal secretary Azam Khan to “play” with the US cypher has come to the fore.

In the audio allegedly featuring Khan, a man can be heard talking about the cypher which Khan — time and again — has claimed mentions the “threat” to remove his government.

Following the leaked audio, Sanaullah — during a press conference in Islamabad — said that if Khan’s audio is real, then he should be exposed before the nation. “Khan has created a narrative of an American conspiracy to mislead the nation and divide it,” he added.

Criticising the PTI chief, the interior minister said that Khan has caused “irreparable damage to Pakistan and destroyed the country’s economy and political culture.”

“I will show students Imran Khan’s awful face,” said Sanaullah with reference to a university lecture that Khan delivered, adding that this “political fitna” has to be ended in a political way.

The PML-N leader further said that the audio talks about changing the minutes of government meetings. “This player is playing with the nation and is working on a specific agenda,” he added.

The second alleged video about Sanaullah, Defence Minister Khawaja Muhammad Asif, Sardar Ayaz Sadiq and others was also leaked, and it contained a discussion regarding PTI’s resignations.