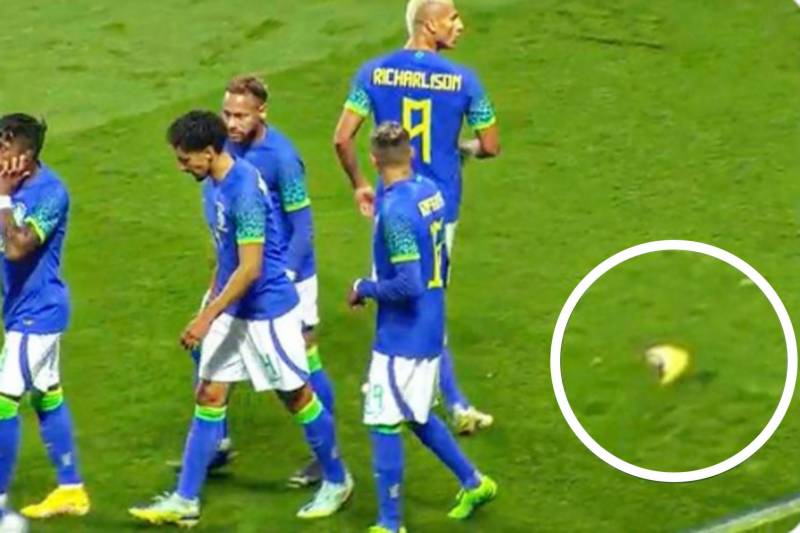 Richarlison was the target of a banana thrown from the crowd as Brazil thrashed Tunisia 5-1 in a friendly in Paris on Tuesday, while Neymar edged closer to Pele’s all-time scoring record for the five-time world champions.

The game at the Parc des Princes was also briefly paused in the first half as the crowd were twice implored not to point laser pens at Brazil players.

“Unfortunately… a banana was thrown on the pitch towards Richarlison, scorer of the second Brazilian goal,” the Brazilian football confederation (CBF) said on Twitter.

“The CBF reinforces its position to combat racism and repudiates any prejudiced act.”

The Selecao produced a dominant first-half display in their final outing before travelling to Qatar for the World Cup, with Raphinha netting twice and Neymar moving to within two of Pele’s record.

Richarlison scoring for Brazil today against Tunisia and a banana was thrown in front of him during the celebrations. Sickening stuff and no need for these type of racist fans at matches. pic.twitter.com/DQlKIBcMTm

Richarlison also found the net, while Pedro scored as a second-half substitute before responding to more boos and missiles from the crowd by bowing in front of them in celebration.

“It’s a shame, it’s difficult to see images like that,” said Brazil captain Thiago Silva, whose team posed for a team photo before the match with a banner bearing an anti-racism message.

“Unfortunately it seems that we can’t change people’s mentality.

“I hope they will realise that this doesn’t work, it’s the past, we have to change. Unfortunately, people continue with this mentality.”

Tite’s Brazil will head into their World Cup Group G opener against Serbia on November 24 on a 15-match unbeaten run, dating back to their Copa America final loss to Argentina last year.

The scene for a bad-tempered match was set when the vast numbers of Tunisia fans jeered the Brazilian national anthem before kick-off.

“I was puzzled, I was saying ‘No, it’s a lack of respect’. Football is a sport that promotes inclusion,” said Tite.

Brazil took the lead in the 12th minute, though, as Casemiro clipped the ball over the top and Barcelona winger Raphinha directed a wonderful looping header over Tunisia goalkeeper Aymen Dahmen and into the net.

Incredibly, Brazil were back ahead just seconds after that setback, as Raphinha sent Richarlison in behind to drill a strike through the legs of Dahmen to score his third goal in two games after a double against Ghana.

The Tottenham forward celebrated in front of the Tunisian supporters, who responded by throwing a banana and plastic cups in his direction.

Fred kicked the banana off the pitch, before extra security guards took up residence on the side of the field.

Brazil almost extended their advantage as Paqueta followed a fine turn with a low shot which Dahmen tipped wide.

But from the resulting corner, Casemiro was hauled down in the box and Neymar stepped up to roll home his 75th international goal from the penalty spot, despite having lasers pointed at his face.

Brazil continued to cut through the visitors’ defence with ease and Raphinha scored again in the 40th minute by firing in off the post from the edge of the box.

Things went from bad to worse for Tunisia before half-time as Dylan Bronn brought down Neymar and was harshly sent off after a brief melee between the two teams.

Tunisia were much improved after the break but Brazil still scored again with 16 minutes remaining through Flamengo forward Pedro’s maiden goal for his country.

Earlier on Tuesday, World Cup hosts Qatar survived a late penalty miss by Alexis Sanchez to hold Chile to a 2-2 draw in Vienna.

Canada, who are preparing for their first World Cup since 1986, lost 2-0 to Uruguay in Bratislava as Liverpool’s Darwin Nunez scored his third international goal.

Sardar Azmoun scored as a substitute to earn Iran a 1-1 draw with African champions Senegal. Morocco drew 0-0 with Paraguay in Seville.