Saboor once again receives bashing for her ‘revealing’ outfit 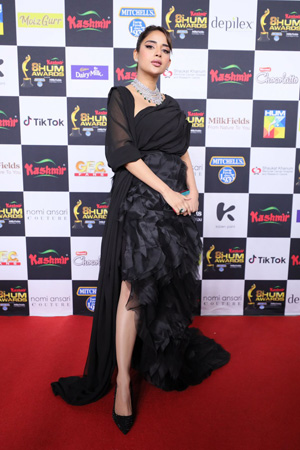 Recently, Saboor Aly flew to Canada to attend the 8th Hum Awards, taking to her Instagram, the Parizaad actor gave a sneak peek at her trip.

She uploaded a video wearing a sleeveless short body top, paired with black jeans as she roamed around Toronto. In no time, the video started making the rounds, leaving the internet triggered. The netizens expressed their dismay over Aly’s outfit choice and bashed the actor for wearing a ‘revealing dress’. An Internet user said, “Canadian Muslims are in Hijab and Pakistani Muslims are promoting nudity.” Another person took a dig at her, and said, “These people are representing our Islamic country.”

The Gul-o-Gulzar actor shared a photo of herself a few months ago wearing a stunning lace saree and at that time too; she also faced criticism for her revealing attire. Netizens criticized the actor by saying, “What kind of a Muslim are you?” and “For God’s sake, wear something decent.”

Saboor Aly is a versatile Pakistani actor who has made her mark in the Pakistani drama industry without having any artistic background, in a short span of time. Aly started her career with Choti Si Kahani and till now, she has worked in many famous drama serials, including Parizaad, Amanat, Mujhe Vida Kar, Fitrat, Naqab Zan, Waada, Gul-o-Gulzar, and many others.

The actor has recently been awarded the best supporting actor-female award for her role in the famous drama serial Parizaad.