Will ‘The Legend of Maula Jatt’ get a global release?

* Set to be one of the most expensive movies ever made in Pakistani cinema, 'The Legend of Maula Jatt,' is also eyeing a release in the UAE 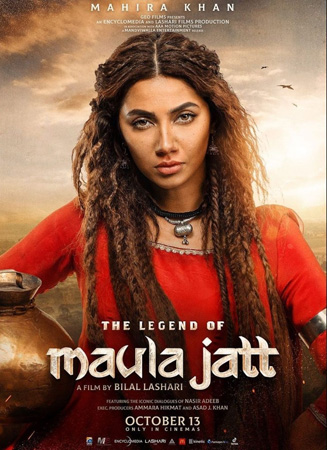 The much-awaited reboot of the Pakistan’s most iconic movie, Maula Jatt, is likely to get an international release along with the release in local cinemas.

In pictures shared by the film’s producer, Ammara Hikmat, one of the world’s largest cinema chain – AMC Theatres, will be screening The Legend of Maula Jatt.

Set to be one of the most expensive movies ever made in Pakistani cinema, The Legend of Maula Jatt, will also eyeing a release in the UAE.

Apart from the USA and UAE, it is expected that TLOMJ will screen in Saudi Arabia, Qatar, Australia and the UK.

The filmmakers have partnered with Geo Films as their media partner and the film will be locally distributed by Mandviwalla Entertainment, while MovieGoers Entertainment is their international distribution partner.

Recently, all character posters of the movie were released on the official Instagram account of the movie, featuring Mahira Khan, Humaima Malik, Sarmad Khoosat, Hamza Ali Abbasi and Fawad Khan.

The posters were loved by the movie’s fans and also got attention from across the border as well. Bollywood’s actors such as Hrithik Roshan and Emraan Hashmi praised and wished the actors luck for their upcoming venture.

Directed and written by Bilal Lashari, The Legend of Maula Jatt is a remake of Yunus Malik’s 1979 classic Punjabi-language film, which centres on the legendary rivalry between Maula Jatt and Noori Nath. The movie’s first teaser was released in 2019, but due to the global pandemic and a legal battle – a copyright lawsuit filed by the original Maula Jatt’s producer – against the movie, it got delayed, but now TLOMJ will hit the theatres on October 13 this year all over the world.